Skip to main content
WINTER BIBLE SALE: Over 1,200 Deals Up to 80% Off, thru 2/1. Shop Now >
What Falls from the Sky: How I Disconnected From the Internet and Reconnected With the God Who Made the Clouds
By: Esther Emery
Stock No: WW0345107 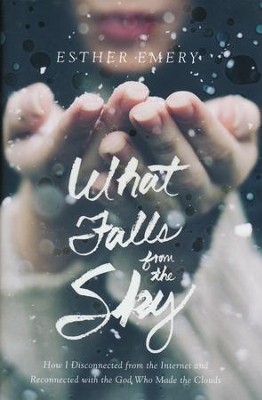 What Falls from the Sky: How I Disconnected From the Internet and Reconnected With the God Who Made the Clouds

▼▲
What Falls from the Sky is Esther's fiercely honest, piercingly poetic account of a year without Internet - 365 days away from the good, the bad, and the ugly of our digital lives - in one woman's desperate attempt at a reset. Esther faces her addiction to electronica, her illusion of self-importance, and her longing to return to simpler days, but then the unexpected happens. Her experiment in analog is hijacked by a spiritual awakening, and Esther finds herself suddenly, inexplicably drawn to the faith she had rejected for so long.

Esther Emery was a successful playwright and theater director, wife and mother, and loving it all - until, suddenly, she wasn’t. When a personal and professional crisis of spectacular extent leaves her reeling, Esther is left empty, alone in her marriage, and grasping for identity that does not define itself by busyness and a breakneck pace of life. Something had to be done.

What Falls from the Sky is Esther’s fiercely honest, piercingly poetic account of a year without Internet - 365 days away from the good, the bad, and the ugly of our digital lives - in one woman’s desperate attempt at a reset. Esther faces her addiction to electronica, her illusion of self-importance, and her longing to return to simpler days, but then the unexpected happens. Her experiment in analog is hijacked by a spiritual awakening, and Esther finds herself suddenly, inexplicably drawn to the faith she had rejected for so long.

Ultimately, Esther’s unplugged pilgrimage brings her to a place where she finally finds the peace - and the God who created it - she has been searching for all along.

What Falls from the Sky offers a path for you to do the same. For all the ways the Internet makes you feel enriched and depleted, genuinely connected and wildly insufficient, What Falls from the Sky reveals a new way to look up from your screens and live with palms wide open in a world brimming with the good gifts of God.

Esther Emery used to direct stage plays in Southern California. But that was a long time ago. Now she lives with her husband and three children off the grid in a yurt, tending to three acres in the foothills of Idaho’s Rocky Mountains. She writes about faith and trying to live a fearless, free life at www.estheremery.com.  Website: http://www.estheremery.com

▼▲
You've never read a book like this one: frankly self-deprecating, boldly complex, intense, joyfully honest, devastatingly beautiful, heartbreakingly funny. What Falls from the Sky is about so much more than one woman's year without the Internet; it's about marriage and choices, faith and rest, community and family, grief and hope, food and dirt---all the things that make our lives worth living. It is impossible to live an unexamined life with Esther as your friend. She is completely herself, and so her story sings of freedom within the silence and even within the noise.
I tore through this book like the pages were on fire. Esther Emery’s courageous, gritty, and self-aware experiment with fasting from the Internet is nothing less than a freedom song. This book is a must-read for anyone who has struggled with finding connection and meaning in a world where communication is reduced to texts, pixels, and emojis. Esther’s story will provide fresh perspective and inspiration.
Esther Emery makes me believe in a different kind of world: where the table, not the screen, has primacy of place; where people change; where silence unfurls---and God still speaks. I'm grateful for that world and the Christ who makes it possible.
What Falls from the Sky is a keenly observed exploration of life on the other side of blogs, Twitter, and Facebook. Emery's rich self-awareness and observation of the world harmonize masterfully, and this debut is rich with wit, irony, and grace. A year richly lived, this is a book to be savored.
What started for Esther as an experiment of whittling down turned into a journey of abundance. I was riveted from the first page, and when I reached the last, I felt I had gained a new friend. Profound and gentle, compelling and engaging, Esther’s story will spur you on to love and live better.
In this remarkable debut, Esther puts hard stop to the chaos of the Internet and lets the waters settle enough to peer into her own soul. And by showing us, unflinchingly, what she finds there, she gives us the courage to get quiet, get attentive, and listen to our own lives.
Esther Emery's What Falls from the Sky is a joyful pilgrimage into the heart of what matters in a complex and connected world. With wit and wisdom, she takes us on a wholehearted journey of an embodied faith: a faith where heart and hands, mind and body matter equally and the truth of Scripture is confirmed in the truth of the earth. What Falls from the Sky is not to be missed.

▼▲
I'm the author/artist and I want to review What Falls from the Sky: How I Disconnected From the Internet and Reconnected With the God Who Made the Clouds.
Back