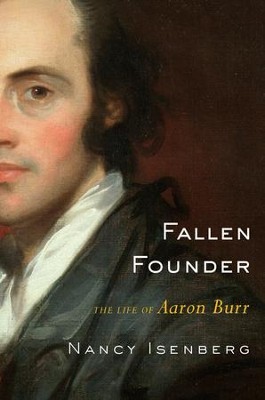 ▼▲
From the author of White Trash and The Problem of Democracy, a controversial challenge to the views of the Founding Fathers offered by Ron Chernow and David McCullough

Lin-Manuel Miranda's play "Hamilton" has reignited interest in the founding fathers; and it features Aaron Burr among its vibrant cast of characters. With Fallen Founder, Nancy Isenberg plumbs rare and obscure sources to shed new light on everyone's favorite founding villain. The Aaron Burr whom we meet through Isenberg's eye-opening biography is a feminist, an Enlightenment figure on par with Jefferson, a patriot, and—most importantly—a man with powerful enemies in an age of vitriolic political fighting. Revealing the gritty reality of eighteenth-century America, Fallen Founder is the authoritative restoration of a figure who ran afoul of history and a much-needed antidote to the hagiography of the revolutionary era.

▼▲
Nancy Isenberg is the author of the New York Times bestseller White Trash: The 400-year untold history of class in America. She is the coauthor, with Andrew Burstein, of Madison and Jefferson. She is the T. Harry Williams Professor of American History at LSU, and writes regularly for Salon.com. Isenberg is the winner of the 2016 Walter & Lillian Lowenfels Criticism Award from the Before Columbus Foundation and was #4 on the 2016 Politico 50 list. She lives in Baton Rouge, Louisiana, and Charlottesville, Virginia.

"Isenberg's meticulous biography reveals a gifted lawyer, politician, and orator who championed civility in government and even feminist ideals, in a political climate that bears a marked resemblance to our own."--Washington Post

▼▲
I'm the author/artist and I want to review Fallen Founder: The Life of Aaron Burr - eBook.
Back
×
Back
×