Faithful: Christmas Through the Eyes of Joseph
By: Adam Hamilton 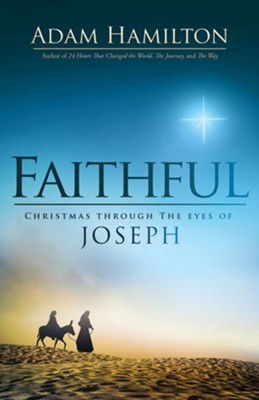 Faithful: Christmas Through the Eyes of Joseph

▼▲
He started his journey as an unknown carpenter, but Joseph became the earthly father of Jesus. For his part in the nativity story, he faced a situation much like our own--encountering life circumstances he didn't choose or understand. In Faithful, Hamilton encourages readers to follow Joseph's example during this Advent and Christmas season, and exchange doubt for courage as we learn to accept and glorify God's will. This volume may be read separately or in conjunction with the Faithful DVD and Study.

From his beginnings as a humble carpenter to his all-important role as the earthly father of Jesus Christ, Joseph's place in the nativity story is sometimes overlooked but contains valuable lessons for all of us. Join Adam Hamilton as he examines Christmas through the eyes of Joseph. Absent from much of the biblical narrative, Joseph never spoke a word, but his courageous actions were crucial to the birth of Christ and God's salvation plan for humanity.

As you read this book, you will understand how Joseph's story is much like our own. In life, we encounter circumstances that we would never have chosen for ourselves. At times it can be tempting just to walk away. Joseph provides us a great example of humbly obeying God even when we don't understand and faithfully moving forward in the strength that God provides.

Exchange your doubt for courage this Advent and Christmas season.The story of Joseph provide us a great example of humbly obeying God even when we don’t understand and faithfully moving forward in the strength that God provides.

Additional components for a four-week adult study include a comprehensive Leader Guide and a DVD featuring author and pastor Adam Hamilton. Chapter topics include:

▼▲
Adam Hamilton is senior pastor of The United Methodist Church of the Resurrection in Leawood, Kansas, one of the fastest growing, most highly visible churches in the country. The Church Report named Hamilton’s congregation the most influential mainline church in America, and he preached at the National Prayer Service as part of the presidential inauguration festivities in 2013 and was appointed to the President's Advisory Council on Faith-based and Neighborhood Partnerships.
Hamilton is the best-selling and award-winning author of Creed, Half Truths, The Call, The Journey, The Way, 24 Hours That Changed the World, John, Revival, Not a Silent Night, Enough, When Christians Get It Wrong, and Seeing Gray in a World of Black and White, all published by Abingdon Press. Learn more about Adam Hamilton at AdamHamilton.org.

▼▲
I'm the author/artist and I want to review Faithful: Christmas Through the Eyes of Joseph.
Back
×
Back
×