Skip to main content
When Faith Is Forbidden: 40 Days on the Frontlines with Persecuted Christians
By: Todd Nettleton, The Voice of the Martyrs
Stock No: WW423068 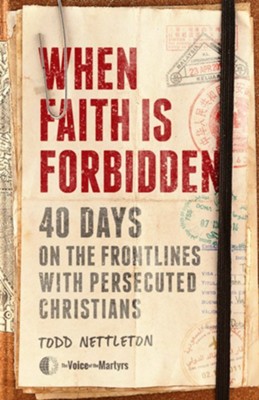 When Faith Is Forbidden: 40 Days on the Frontlines with Persecuted Christians

▼▲
Spend 40 days getting to know your brothers and sisters on the "front lines"---persecuted modern-day disciples who share daily in the sufferings of Christ. You'll be inspired by believers worldwide who risk their safety, security, and lives to follow Jesus. Each eye-opening devotional reading is followed by guided prayer and space for you to respond. 208 pages, hardcover from Moody.

Take a 40-day journey to meet brothers and sisters who share in the sufferings of Christ. When Faith Is Forbidden takes you to meet a Chinese Christian woman who called six months in prison "a wonderful time," an Iraqi pastor and his wife just eight days after assassins' bullets ripped into his flesh, and others from our spiritual family who've suffered greatly for wearing the name of Christ. Each stop on this 40-day journey includes inspiration and encouragement through the story of a persecuted believer. You’ll also find space for reflection and a suggested prayer as you grow to understand the realities of living under persecution—and learn from the examples of the bold believers you'll meet.

For more than 20 years, Todd Nettleton (host of The Voice of the Martyrs Radio) has traveled the world to interview hundreds of Christians who’ve been persecuted for the name of Christ. Now he opens his memory bank—and even his personal journals—to take you along to meet bold believers who will inspire you to a deeper walk with Christ.

▼▲
PHILIP TODD NETTLETON is the Chief of Media Relations and Message Integration for the Voice of the Martyrs--USA and host of The Voice of the Martyrs Radio. He serves as a voice for persecuted Christians, inspiring Christians with the faithfulness of Christ's followers in 70+ nations where they face persecution for wearing His name. During more than 20 years serving at VOM, Todd has travelled the world and conducted face-to-face interviews with hundreds of Christians who've endured persecution in more than 30 nations. He is a graduate of Bartlesville Wesleyan College (now Oklahoma Wesleyan University) and has done postgraduate study at the University of Oklahoma. Todd and his wife, Charlotte, have two sons and two daughters-in-law. In his spare time he enjoys reading, music, travel and sports, including serving as commissioner of a fantasy football league.

THE VOICE OF THE MARTYRS is a nonprofit, interdenominational missions organization dedicated to serving the persecuted church worldwide through practical and spiritual assistance and leading other members of the body of Christ into fellowship with them. Voice of the Martyrs was founded in 1967 by Pastor Richard Wurmbrand, who was imprisoned for fourteen years in Communist Romania for his faith in Christ; his wife, Sabrina, was imprisoned for three years. In 1965 they were ransomed out of Romania, and soon thereafter they established the global network of missions of which Voice of the Martyrs is a part. They based these missions on Hebrews 13:3, "Continue to remember those in prison as if you were together with them in prison, and those who are mistreated as if you yourselves were suffering." (NIV)

▼▲
I'm the author/artist and I want to review When Faith Is Forbidden: 40 Days on the Frontlines with Persecuted Christians.
Back
×