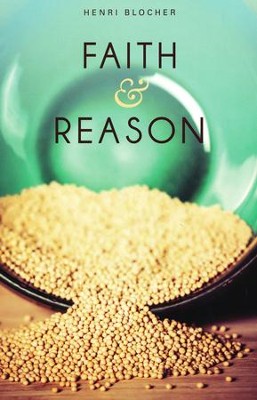 ▼▲
How do we harmonize the findings of science with the revelation of Scripture? Were there errors in the original manuscripts of the Bible? What of those who willfully bend a verse to say whatever they want? Blocher, who is former president of the European Fellowship of Evangelical Theologians, provides a persuasive primer on apologetics. 150 pages, softcover.

In this primer on apologetics, Henri Blocher helps readers navigate the relationship and tensions between faith and reason.

"Doing apologetics" means presenting arguments to lead people to faith or to con rm them in their faith. After discussing the relationship between faith and reason, the author addresses several of the thorniest questions that trouble our efforts to unify a heart for Jesus with a mind at work:

• How do we combine science and faith?

• Does the Bible contain errors?

• Can we make the Bible say whatever we want?

In discussing all of these issues in Faith and Reason, the author reminds us of the motivations that should prompt us to seek the most persuasive reasons for believing: to make our decision to have faith a responsible one, to increase our love for the people around us, and to bring glory to God.

▼▲
Henri A. Blocher is professor emeritus of systematic theology at the Faculté Libre de Théologie Evangélique, Vaux-sur-Seine, France, where he taught for many years, beginning with its founding in 1965. He is former Gunther Knoedler Chair of Theology at Wheaton College, and was a member of the Lausanne Committee on World Evangelization from 1975 to 1980. Blocher studied at a number of institutions including the Sorbonne, London Bible College, Gordon Divinity School, and the Faculté Libre de Théologie Protestante of Paris, and he now sits on the advisory board of the Fellowship of European Evangelical Theologians, which he has also served as president. His books include Evil and the Cross: An Analytical Look at the Problem of Pain and Original Sin, a biblical theology of the Hebrew Bible. He and his wife, Henriette, a psychologist, have three children and seven grandchildren.

▼▲
I'm the author/artist and I want to review Faith and Reason.
Back
×
Back
×