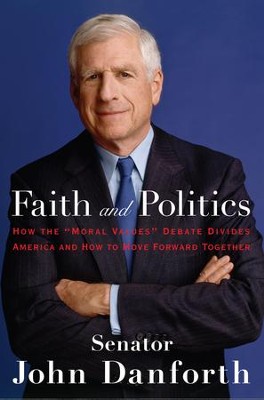 ▼▲
A former United States senator and ordained Episcopal priest examines the controversial intersection of faith and politics in America. As a respected former senator, special envoy for peace in Sudan, priest, as an author, Senator Danforth is uniquely qualified to call for the change we so desperately need. He writes openly about his political life and ambition, humbly about his achievements, and above all with clarity and reason that both Republicans and Democrats hear all too little of.

▼▲
New York Times–bestselling author John Danforth, an ordained Episcopal priest and former US senator, is uniquely qualified to write about one of the most contentious issues in America: the intersection of government and religion. In Faith and Politics, he explores the widening rift between left and right, conservative and liberal, believer and nonbeliever. Danforth takes on many of the polarizing hot-button issues, including stem-cell research, abortion, school prayer, and gay marriage, and addresses how we can approach them with less rancor. Arguing that voters must call for our leaders to turn away from wedge-issue politics and work on our country’s pressing problems, Danforth’s book is a much-needed clarion call to all Americans.

"A lucid, powerful book that is at once reflective and instructive."—Jon Meacham, former editor of Newsweek

"[A] meditation about the contested terrain where politics and religion intersect."—George F. Will

"Danforth calls for a radical change in how his party operates."—The Christian Science Monitor

"This book and its author are a modern-day profile in courage."—David Gergen

"Danforth’s thoughtfulness, deep wisdom, and simple decency radiate from every page, and leave one at the end with rare hope that through commitment, faith and politics can ultimately enrich, not corrupt, one another."—Harold Hongju Koh, dean of Yale Law School

▼▲
John Danforth graduated from Princeton University, Yale Divinity School, and Yale Law School. He practiced law in New York City and St. Louis before serving as attorney general of Missouri, United States senator from Missouri, and United States representative to the United Nations. An ordained Episcopal priest, he is the author of Faith and Politics and Resurrection: The Confirmation of Clarence Thomas. He is a partner in the law firm of Dowd Bennett LLP lives in St. Louis.

▼▲
I'm the author/artist and I want to review Faith and Politics - eBook.
Back
Back