Facing Your Giants: The God Who Made a Miracle Out of David Stands Ready to Make One Out of You - eBook
By: Max Lucado 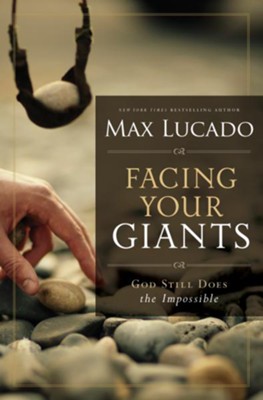 Facing Your Giants: The God Who Made a Miracle Out of David Stands Ready to Make One Out of You - eBook

▼▲
Reveal the Goliath in your life that taunts you-bills, addictions, failures-and discover a God that is with you to slay your giant. This encouraging resource enables us to see inside the humble beginnings of David in the Bible and realize that no matter our weaknesses, God is greater still. Find victory in God's will and success as you follow His path. The same God who was at David's side is the same God who will defend you today.

You know your Goliath. You recognize his walk, the thunder of his voice.

He taunts you with bills you can't pay, people you can't please, habits you can't break, failures you can't forget, and a future you can't face. But just like David, you can face your giant, even if you aren't the strongest, the smartest, the best equipped, of the holiest.

David. You could read his story and wonder what God saw in him. His life has little to offer the unstained, straight-A saint. He fell as often as he stood, stumbled as often as he conquered. But for those who know the sound of Goliath, David gives this reminder:

Focus on giants -- you stumble; focus on God -- your giants tumble.

If you're ready to face your giants, let his story inspire you. The same God who helped him will help you.

Since entering the ministry in 1978, Max Lucado has served churches in Miami, Florida; Rio de Janeiro, Brazil; and San Antonio, Texas. He currently serves as Teaching Minister of Oak Hills Church in San Antonio. He is America’s bestselling inspirational author with more than 140 million books in print.

▼▲
The stones and sling. The message from a prophet. The king who followed after Gods own heart. The biblical story of David is a familiar one. It is a tale told in many forms. However, youve never heard it told quite like this! Max Lucado is now the narrator of Davids story. In Facing Your Giants, this bestselling author creates a picture of what Davids life looks like from todays viewpoint.
In our modern world, giants like Goliath linger closer than we realize. Just as David needed to focus on God in the midst of his struggles, we need to do the same. In this in-depth study on David, Lucado reveals the life of a man who was God-focused. He weaves the tale of a follower of God who had his enemies and his friends, his thoughts and his actions, his stumbles and his victories. Through the pages of Lucados latest book, David comes alive and demonstrates how readers can trust in God amidst their daily battles.
Lucados words are fresh and the Bibles words familiar. The balance between the two work to make Facing Your Giants a well-written book. Lucados relaxed writing style transforms David and his life into something more than a story. Its an experience. However, as familiar as the topic is, the authors retelling is humorous, thought provoking, and worth a new look at.  Amy Nickerson, Christian Book Previews.com

▼▲
I'm the author/artist and I want to review Facing Your Giants: The God Who Made a Miracle Out of David Stands Ready to Make One Out of You - eBook.
Back
×
Back
×