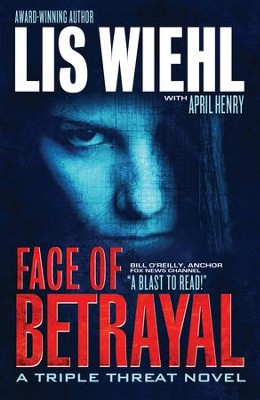 ▼▲
While home on Christmas holiday, a seventeen-year-old Senate page takes her dog out for a walk and never returns. Reporter Cassidy Shaw is the first to break the story. The media firestorm that ensues quickly ensnares Federal Prosecutor Allison Pierce and FBI Special Agent Nicole Hedge ... who just happen to be Cassidy's best friends. It appears the young page was romantically involved with a senator-a senator now under suspicion for her disappearance.
As time begins to run out for the missing girl, Cassidy, Allison, and Nicole fight to locate her before its too late, even while each fights her own personal battles-a stalker, single-motherhood, and an abusive relationship.

While home on break, a seventeen-year-old Senate page takes her dog out for a walk and never returns. The resulting media firestorm quickly ensnares television reporter Cassidy Shaw, Federal Prosecutor Allison Pierce, and FBI Special Agent Nicole Hedges. Together, these life-long friends call themselves The Triple Threat—a nickname derived from their favorite dessert as well as their uncanny ability to crack cases from their three unique positions of power.

Together, they must find the one face of betrayal amidst a crowd of growing suspects—including a US Senator—before they become the next victims.

"One of top ten best books of year" —Suspense Magazine

"[A] sizzling political thriller . . . The seamless plot offers a plethora of twists and turns." —Publishers Weekly

Lis Wiehl is the former legal analyst for Fox News and the O’Reilly Factor and has appeared regularly on Your World with Neil Cavuto, Lou Dobbs Tonight, and the Imus morning shows. The co-host of WOR radio's "WOR Tonight with Joe Concha and Lis Wiehl", she has served as legal analyst and reporter for NBC News and NPR’s All Things Considered, as a federal prosecutor in the United States Attorney’s office, and was a tenured professor of law at the University of Washington. She lives near New York City.

▼▲
Wiehl, a Fox News commentator and legal analyst, teams with mystery veteran Henry (Buried Diamonds) on a sizzling political thriller. When 17-year-old Senate page Katie Converse goes missing on her Christmas break near her parents white Victorian home in Portland, Ore., law enforcement and media personnel go into overdrive in a search for clues. Three friends at the pinnacle of their respective careersAllison Pierce, a federal prosecutor; Cassidy Shaw, a crime reporter; and Nicole Hedges, an FBI special agentsoon discover that Katie wasnt the picture of innocence painted by her parents. It appears Katie was having an affair with a much older man, a senator whose political career could be derailed if the affair was publicized. The seamless plot offers a plethora of twists and turns. A blurb from Fox News commentator Bill OReilly will help draw attention to Wiehls debut. (Apr.) Copyright 2009 Reed Business Information.

▼▲
I'm the author/artist and I want to review Face of Betrayal - eBook.
Back
×
Back
×