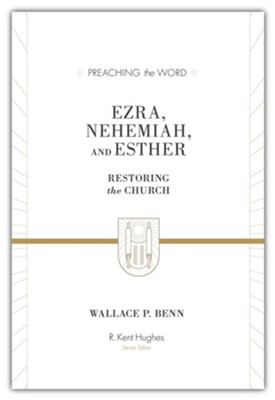 Packed with exciting Biblical history, the books of Ezra, Nehemiah, and Esther display God’s faithfulness through trials, the promise of restoration, and the beauty of revival.

This commentary provides deep insights to help pastors and teachers draw connections between Ezra and Nehemiah, both of whom display godly leadership and the power of prayer. Then readers will follow Esther to learn how God’s providence reigns, even in a pagan world, and see how each of these Old Testament books points to the promise of our Savior Jesus Christ.

This commentary, written by an experienced Bible expositor, helps modern readers understand the messages of Ezra, Nehemiah, and Esther and apply them to their own lives. Part of the Preaching the Word commentary series.

Wallace P. Benn is a well-known Bible teacher and preacher in the British Isles and Ireland. He is the founder of Bible by the Beach, a Bible-teaching convention in Eastbourne, England, and a trustee of Irish Church Missions, an evangelical church-planting agency in Ireland. Wallace and his wife, Lindsay, have two grown children and three grandchildren. They are members of St. Botolph’s Church in Kettering, England.

▼▲
I'm the author/artist and I want to review Ezra, Nehemiah, and Esther: Restoring the Church.
Back
Back