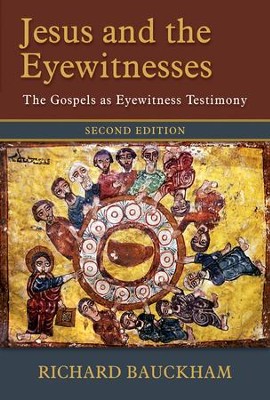 Jesus and the Eyewitnesses: The Gospels as Eyewitness Testimony, 2nd edition

This critically acclaimed work, Jesus and the Eyewitnesses argues that the four Gospels are based on the eyewitness testimony of those who personally knew Jesus. Noted New Testament scholar Richard Bauckham challenges the prevailing assumption that the stories about Jesus circulated as "anonymous community traditions," asserting instead that they were transmitted in the names of the original eyewitnesses.

To drive home this point, Bauckham draws on internal literary evidence, the use of personal names in first-century Jewish Palestine, and recent developments in the understanding of oral tradition. Bauckham's book also taps into the rich resources of modern study of memory, especially in cognitive psychology, refuting the conclusions of the form critics and calling New Testament scholarship to make a clean break with that long-dominant tradition. Finally, Bauckham challenges readers to end the classic division between the "historical Jesus" and the "Christ of faith," proposing instead the "Jesus of testimony" as presented by the Gospels.

In this expanded second edition Bauckham has added a new preface, three substantial new chapters that respond to critics and clarify key points of his argument, and a comprehensive new bibliography.

▼▲
Richard Bauckham is professor emeritus of New Testament studies at the University of St. Andrews, Scotland, senior scholar at Ridley Hall, Cambridge, and a fellow of both the British Acad-emy and the Royal Society of Edinburgh. His many other books include Jesus and the God of Israel, Gospel Women, and Jesus: A Very Short Introduction.

▼▲
PRAISE FOR THE FIRST EDITION:

N. T. Wright
"The question of whether the Gospels are based on eyewitness accounts has long been controversial. Richard Bauckham, in a characteristic tour de force, draws on his unparalleled knowledge of the world of the first Christians to argue not only that the Gospels do indeed contain eyewitness testimony but that their first readers would certainly have recognized them as such. This book is a remarkable piece of detective work, resulting in a fresh and vivid approach to dozens, perhaps hundreds, of well-known problems and passages."
James D. G. Dunn

"Another blockbuster from the productive pen of Richard Bauckham. . . . Not to be missed!"

Graham Stanton
"Shakes the foundations of a century of scholarly study of the Gospels. There are surprises on every page. A wealth of new insights will provoke lively discussion for a long time to come. Readers at all levels will be grateful for Bauckham's detective work that uncovers clues missed by so many."

Times Literary Supplement
"Bauckham's careful and eloquent presentation of his argument, supported not just by careful scholarship but by admirable common sense, deserves earnest consideration by all."
Choice
"It will be hard to take seriously future works on the origin of the Gospels that have not interacted with Bauckham. . . . Recommended."

Martin Hengel
"Fascinating! . . . This book ought to be read by all theologians and historians working in the field of early Christianity. Further, Bauckham's convincing historical method and broad learning will also help pastors and students to overcome widespread modern Jesus fantasies."

— Expository Times
"This new edition is no mere tweaking of the first edition. . . . Its reissue, in expanded form, leads one to ponder anew some of its central claims, which in turn open up perennially important issues for understanding the transmission of the Jesus tradition during its earliest stages."

▼▲
I'm the author/artist and I want to review Jesus and the Eyewitnesses: The Gospels as Eyewitness Testimony, 2nd edition.
Back
Back