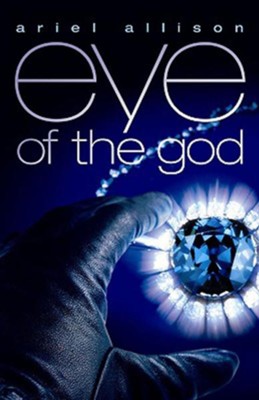 eye of the god - eBook

▼▲
Alex and Isaac Weld, the most lucrative jewel thieves in the world, are on a quest to steal the Hope diamond , which according to legend was once the eye of a Hindu idol named Rama Sita. When it was stolen in the 17th century, it is said that the idol cursed all those who would possess it. That won't stop the brilliant and ruthless Weld brothers. However, they are not prepared for Dr. Abigail Mitchell, the beautiful Smithsonian Director, who has her own connection to the Hope Diamond and a deadly secret to keep. Abby committed long ago that she would not serve a god made with human hands, and the "eye of the god" is no exception. Her desire is not for wealth, but for wisdom. She seeks not power, but restoration. eye of the god takes the fascinating history surrounding the Hope Diamond and weaves it together with a present-day plot to steal the jewel from the Smithsonian Institute.

▼▲
Although she speaks and writes, Ariel Allison is first and foremost the wife of Ashley, and mother of London, Parker, Marshall, and Colby. She has a penchant for adrenaline-infused madness such as rock climbing, running marathons, and jumping off bridges – as if raising four preschool boys were not adventure enough. Her first novel, Eye of the God, released in October 2009, from Abingdon Press. She is the co-author of Daddy Do You Love Me: a Daughter’s Journey of Faith and Restoration (New Leaf Press, 2006), Jesus: Dead or Alive (Regal Books, 2009), and the Justin Case series of children’s books (Harvest House, 2010). In addition, Ariel is also the assistant director of the nationwide book club, She Reads. When not immersed in a book, changing a diaper, or rescuing her dog from the death-grip of a toddler, you can find Ariel loitering in her little corner of cyberspace at www.arielallison.com. She also ponders on life and literature at www.shereads.org. She and her family make their home in Texas, which is, according to her husband, the greatest state in the union.

▼▲
Ariel Allison writes, reads, and lives in a small Texas town. When not attached to her laptop, she is surrounded by a gaggle of little boys, one blue-eyed husband, and a neurotic dog. She explores the issue of greed in her new novel eye of the god.