BRING CHRISTMAS HOME SALE: Save up to 85% through 11/2 >
An Exposition on Prayer: Igniting the Fuel to Flame Our Communication with God - eBook
By: James Rosscup 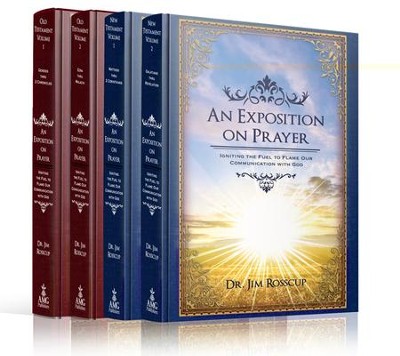 An Exposition on Prayer: Igniting the Fuel to Flame Our Communication with God - eBook

Endorsed by John MacArthur, Dr. Cyril J. Barber, R. Kent Hughes, Elizabeth George, and Harold Hoehner, this is a "must-have" resource for any Christian. These four volumes are a unique, one-of-a-kind commentary that explores every prayer of the Bible. An excellent tool for study and meditation, the commentary includes an introduction and background information for every book of the Bible. Every prayer is outlined with numerous cross references.  Old Testament: Vol. 1 (Genesis through 2 Chronicles) and Vol. 2 (Ezra through Malachi). New Testament: Vol. 1 (Matthew through Romans) and Vol. 2 (1 Corinthians through Revelation).  Available as a 4-volume set only.

Dr. Jim Rosscup has taught classes on the Old Testament and the New Testament for over 50 years. He studied under J. Dwight Pentecost at Dallas Theological Seminary, where he received a Th.D. in Bible. He obtained a Ph.D in New Testament at King’s College, University of Aberdeen, Scotland, under the supervision of I. Howard Marshall.

Throughout his educational career, Dr. Jim Rosscup received recognition for his writing skills, obtaining awards for journalism, feature writing, essays, and his Th.D. dissertation. Shortly after completing his Master of Theology program at Dallas Theological Seminary in 1961, he served on the staff of Campus Crusade for Christ for one year, with responsibilities for their Collegiate Challenge magazine. From 1965 to 1987 Dr. Jim Rosscup served as Chairman of the Department of Bible Exposition at Talbot Theological Seminary. He also worked as an adjunct faculty member for Grace Theological Seminary in its doctoral program.

As a prolific author, he has written a number of articles and books, among which are Abiding in Christ: Studies in John 15 and Commentaries for Biblical Expositors. Dr. Jim Rosscup joined the faculty of The Master’s Seminary in 1987. He retired from full-time teaching in June, 2005, but continues to teach a course or two each semester. He is active in his local church, and has spoken often in conference and church ministries throughout the Southwest United States.

"This is the most comprehensive material that has ever been written on prayer. Jim Rosscup, in his usual and rich manner, has pulled together everything the Scripture has said on prayer and explained it. Not only is this a massive treatment from the Word of God, but from a man who, for twenty years, has been teaching a life transforming course on prayer at The Master’s Seminary. He has been living out these truths and teaching thousands of young ministers to do the same with profound blessing."

▼▲
I'm the author/artist and I want to review An Exposition on Prayer: Igniting the Fuel to Flame Our Communication with God - eBook.
Back
×
Back
×