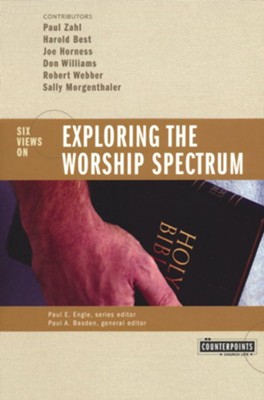 ▼▲
A clear, engaging description of the six most prevalent models of worship in North American churches, presented by advocates for each position. The contributors evaluate each position in order to broaden people's understanding of diverse models and shed light on an emotive issue.

An exploration of what worship looks like from a biblical standpoint and why the topic of worship can be so contentious among Christians.

Because worship is inherently theological--because it's a manifestation of humanity's response to God's holiness--it's important to take seriously how we worship and the roles it serves in personal displays of adoration and in community with other believers.

This unique format allows those with a heart for worship to compare different perspectives and draw their own conclusions on what the Bible teaches. It allows readers to understand the various approaches to worship, carefully evaluate their strengths and weaknesses, and make personal choices without adopting a judgmental spirit.


Paul A. Basden (PhD, Southwestern Baptist Theological Seminary) is one of the senior pastors at Preston Trail Community Church in Frisco, Texas. He has also served as pastor of other churches in Alabama and Texas and as an adjunct professor at Beeson Divinity School. He is a graduate of Baylor University and Southwestern Baptist Theological Seminary and the author of The Worship Maze.
Paul F. M. Zahl (ThD, University of Tubingen) is dean of Cathedral Church of the Advent (Episcopal) in Birmingham, Alabama.
Harold M. Best (DSM, Union Theological Seminary) is emeritus dean/professor of music of the Wheaton College Conservatory of Music.
Joe Horness (BA, Trinity College) is worship director at Willow Creek Community Church in South Barrington, Illinois, where he has been on staff since 1981.

▼▲
Six different writers each present a chapter on their particular worship -- running the gamut from formal liturgical, to charismatic, to emerging worship. Each chapter is followed by short commentaries by the other writers providing a variety of perspectives on each worship style. What emerges is a fascinating conversation that doesn't try to convert you to one particular style of worship, but broadens your mind to the inherent worth of different types of worship. A good read. -- YouthWorker Journal

▼▲
I'm the author/artist and I want to review Exploring the Worship Spectrum: 6 Views.
Back
Back