Skip to main content
CYBER WEEK SALE: Up to 88% off, thru 12/6. >
Jesus, Keep Me Near the Cross: Experiencing the Passion and Power of Easter / New edition
Edited By: Nancy Guthrie
By: Edited by Nancy Guthrie
Stock No: WW573123 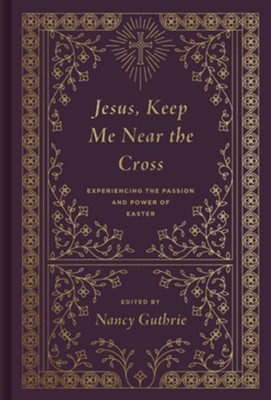 Jesus, Keep Me Near the Cross: Experiencing the Passion and Power of Easter / New edition

This collection of 25 readings, compiled by Nancy Guthrie, features writings and sermons from classic and contemporary theologians and Bible teachers, each encouraging thoughtful contemplation of the cross and resurrection during the Easter season.

John Owen (1616–1683) was vice chancellor of Oxford University and served as advisor and chaplain to Oliver Cromwell. Among the most learned and active of the Puritans in seventeenth-century Europe, and known as the "theologian's theologian," he was accomplished both in doctrine and practical theology.

STEPHEN F. OLFORD is both founder of and senior lecturer at the Stephen Olford Center for Biblical Preaching in Memphis, Tennessee. Formerly the minister of New York City's famed Calvary Baptist Church, he has authored numerous books and is a regular contributor to leading Christian periodicals on both sides of the Atlantic.

The late Adrian Rogers was the pastor of the 27,000-member Bellevue Baptist Church in Memphis. He served three times as President of the Southern Baptist Convention and wrote many books. He also reached many people through his television and radio ministry, “Love Worth Finding.”

J. I. Packer (1926–2020) served as the Board of Governors’ Professor of Theology at Regent College. He authored numerous books, including the classic best seller Knowing God. Packer also served as general editor for the English Standard Version Bible and as theological editor for the ESV Study Bible.

▼▲
I'm the author/artist and I want to review Jesus, Keep Me Near the Cross: Experiencing the Passion and Power of Easter / New edition.
Back
Back