Skip to main content
Come, Thou Long-Expected Jesus: Experiencing the Peace and Promise of Christmas / New edition
By: Nancy Guthrie
Stock No: WW573116 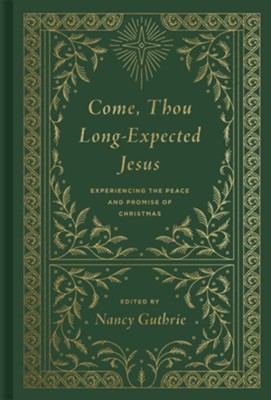 Come, Thou Long-Expected Jesus: Experiencing the Peace and Promise of Christmas / New edition

This redesigned anthology of Advent readings edited by best-selling author Nancy Guthrie, features 22 works by classic and contemporary theologians, each helping to prepare your heart for the sacredness of the Christmas season.

Nancy Guthrie teaches the Bible at her home church, Cornerstone Presbyterian Church in Franklin, Tennessee, as well as at conferences around the country and internationally, including her Biblical Theology Workshop for Women. She is the author of numerous books and the host of the Help Me Teach the Bible podcast with the Gospel Coalition. She and her husband founded Respite Retreats for couples who have faced the death of a child and are cohosts of the GriefShare video series.

Joni Eareckson Tada is CEO of Joni and Friends, a global ministry that serves the practical and spiritual needs of people with disabilities. She is also an artist and the author of numerous bestselling books, including Joni; A Place of Healing; and When God Weeps. Joni and her husband, Ken, reside in Calabasas, California.

Martin Luther (1483–1546) was a German theologian and one of the most influential figures in the Protestant Reformation. Some of Luther’s best-known works are the Ninety-Five Theses, “A Mighty Fortress Is Our God,” and his translation of the Bible into German.

▼▲
I'm the author/artist and I want to review Come, Thou Long-Expected Jesus: Experiencing the Peace and Promise of Christmas / New edition.
Back
Back