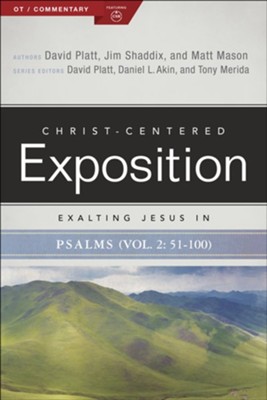 Exalting Jesus in Psalms, Volume 2, Psalms 51-100  is part of the Christ-Centered Exposition Commentary series. This commentary series takes a Christ-centered approach to expositing each book of the Bible. Rather than a verse-by-verse approach, Matt Mason, David Platt, and Jim Shaddix have crafted chapters that explain and apply key passages in Psalms.

Readers will learn to see Christ in all aspects of Scripture, and they will be encouraged by the devotional nature of each exposition presented as sermons and divided into chapters that conclude with a "Reflect & Discuss" section, making this series ideal for small group study, personal devotion, and even sermon preparation. It’s not academic but rather presents an easy reading, practical and friendly commentary.

▼▲
Matt Mason and his wife, Paula, along with their three children, reside in Birmingham, Alabama, where he serves as the senior pastor of The Church at Brook Hills. He was a contributing author to Doxology and Theology: How the Gospel Forms the Worship Leader (B&H, 2013).

David Platt serves as Lead Pastor of McLean Bible Church in Washington D.C. He is the founder and chairman of Radical, an international ministry that serves the church for the cause of Christ—to glorify God by making disciples and multiplying churches among all nations. He holds a Ph.D. from New Orleans Baptist Theological Seminary and is the author of Radical, Radical Together, Follow Me, Counter Culture,and Something Needs to Change.