Skip to main content
CYBER WEEK SALE! Spot great deals up to 88% off. >
Everything She Didn't Say
By: Jane Kirkpatrick
Stock No: WW72701X 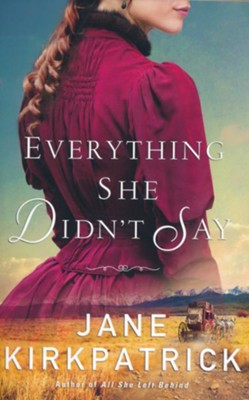 Everything She Didn't Say

In Carrie Strahorn's life, there are two versions of everything: the one she'll share with others and the one she actually lives. As she follows her husband through the American West, her journey takes her through heartache, disappointment, and a life of unparalleled adventure.

▼▲
In 1911, Carrie Strahorn wrote a memoir entitled Fifteen Thousand Miles by Stage, which shared some of the most exciting events of 25 years of traveling and shaping the American West with her husband, Robert Strahorn, a railroad promoter, investor, and writer. That is all fact. Everything She Didn't Say imagines Carrie nearly ten years later as she decides to write down what was really on her mind during those adventurous nomadic years.

Certain that her husband will not read it, and in fact that it will only be found after her death, Carrie is finally willing to explore the lessons she learned along the way, including the danger a woman faces of losing herself within a relationship with a strong-willed man and the courage it takes to accept her own God-given worth apart from him. Carrie discovers that wealth doesn't insulate a soul from pain and disappointment, family is essential, pioneering is a challenge, and western landscapes are both demanding and nourishing. Most of all, she discovers that home can be found, even in a rootless life.

With a deft hand, New York Times bestselling author Jane Kirkpatrick draws out the emotions of living--the laughter and pain, the love and loss--to give readers a window not only into the past, but into their own conflicted hearts. Based on a true story.

▼▲
Jane Kirkpatrick is the New York Times and CBA bestselling and award-winning author of more than thirty books, including All She Left Behind, A Light in the Wilderness, The Memory Weaver, This Road We Traveled, and A Sweetness to the Soul, which won the prestigious Wrangler Award from the Western Heritage Center. Her works have won the WILLA Literary Award, USABestBooks, the Carol Award for Historical Fiction, and the 2016 Will Rogers Medallion Award. Jane lives in Central Oregon with her husband, Jerry. Learn more at www.jkbooks.com.

▼▲
I'm the author/artist and I want to review Everything She Didn't Say.
Back
Back