Skip to main content
BIBLE SALE OF THE SEASON: For a Limited Time ~ Save on over 1,100 Bibles!
Everything Is Just Beginning
By: Erin Bartels
Stock No: WW0741655 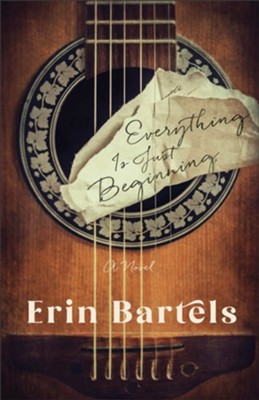 Everything Is Just Beginning

Talented musician Michael Sullivan has seen better days. Living in his uncle's trailer and working at a dead-end job, he's beginning to lose hope. Then an invitation for a swanky New Year's Eve party shows up. When Michael meets the enigmatic heir to a fading musical dynasty, can they recognize the new start they both need?

▼▲
An Immersive Story of Music, Struggle, and Starting Over from an Award-Winning Author

Michael Sullivan is a talented lyricist and a decent guitarist, but since he was kicked out of his band (and his apartment), he's not sure he'll ever get a record deal. Living with his loser uncle in a beat-up trailer and working a dead-end job, Michael has little reason to hope for a better future. Until the invitation for a swanky New Year's Eve party shows up in the mailbox. It's for his uncle, with whom he shares his name, but his uncle is going out of town . . .

On the effervescent night of December 31, 1989--as the Berlin Wall is coming down, the Soviet Union is inching toward democracy, and anything seems possible--Michael will cross paths with the accomplished and enigmatic young heir to a fading musical dynasty, forever altering both of their futures.

Award-winning novelist Erin Bartels enchants with this story of two lonely souls who have exactly what the other one needs--if they could simply turn their focus from what is ending to what is just beginning.

▼▲
Erin Bartels is the award-winning author of We Hope for Better Things, The Words between Us, All That We Carried, and The Girl Who Could Breathe Under Water. A two-time Christy finalist and winner of two 2020 WFWA Star Awards and the 2020 Michigan Notable Book Award, Erin has been a publishing professional for twenty years. She lives in Lansing, Michigan, with her husband, Zachary, and their son. Find her online at www.erinbartels.com.

▼▲
I'm the author/artist and I want to review Everything Is Just Beginning.
Back
Back