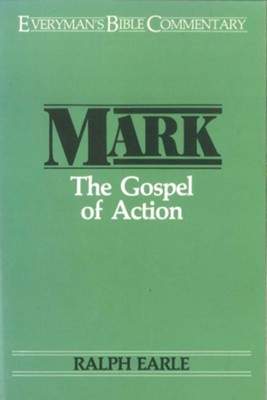 ▼▲
Mark was a man of action, a man of the outdoors-and his gospel mirrors his character. Dr. Earle examines the gospel thoroughly and systematically, but without superfluous details that would rob its momentum and vigor.

▼▲
RALPH EARLE (1908-1995; B.A., Eastern Nazarene College; M.A., Boston University; B.D., Gordon Divinity School; D.D., Eastern Nazarene College) was Distinguished Professor of New Testament Emeritus at the Nazarene Theological Seminary, Kansas City, Missouri, where he first began teaching in 1945. While holding pastorates in Woonsocket, Rhode Island, and Everett, Massachusetts, from 1933 to 1945, he was a professor of biblical literature at Eastern Nazarene College, Wollaston, Massachusetts. He later served on the fifteen-man Committee on Bible Translation, the governing body for the New International Version of the Bible. Ralph is the author of several books including Mark (from the Everyman¿s Bible Commentary series), Word Meanings in the New Testament, How We Got Our Bible, Exploring the New Testament, and Story of the New Testament. He is now at home with his Lord.

▼▲
I'm the author/artist and I want to review Mark- Everyman's Bible Commentary / New edition - eBook.
Back
×
Back
×