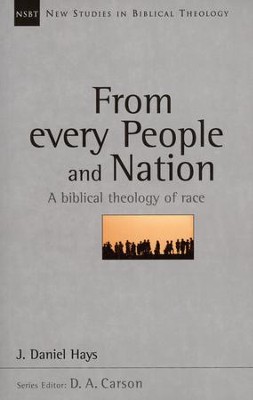 ▼▲
In Revelation 7:9, John describes "a great multitude . . . from every nation, tribe, people, and language." In this thought-provoking volume, Hays shows how the theme of race runs throughout Scripture, pointing to the global and multiethnic dimensions inherent in the overarching plan of God---and highlighting the important role of Africans from Cush (Ethiopia). 240 pages, softcover from InterVarsity.

▼▲
"After this I looked and there before me was a great multitude that no one could count, from every nation, tribe, people and language . . ." (Revelation 7:9). The visions in the book of Revelation give a glimpse of the people of God at the consummation of history—a multiethnic congregation gathered together in worship around God's throne. Its racial diversity is expressed in a fourfold formula that first appears in Genesis 10. The theme of race runs throughout Scripture, constantly pointing to the global and multiethnic dimensions inherent in the overarching plan of God. In response to the neglect of this theme in much evangelical biblical scholarship, J. Daniel Hays offers this thorough exegetical work in the New Studies in Biblical Theology series. As well as focusing on texts which have a general bearing on race, Hays demonstrates that black Africans from Cush (Ethiopia) play an important role in both Old and New Testament history. This careful, nuanced analysis provides a clear theological foundation for life in contemporary multiracial cultures and challenges churches to pursue racial unity in Christ. Addressing key issues in biblical theology, the works comprising New Studies in Biblical Theology are creative attempts to help Christians better understand their Bibles. The NSBT series is edited by D. A. Carson, aiming to simultaneously instruct and to edify, to interact with current scholarship and to point the way ahead.

▼▲
Hays (Ph.D., Southwestern Baptist Theological Seminary) is chair of the department of biblical studies and theology at Ouachita Baptist University in Arkadelphia, Arkansas. He and his family have worked previously as missionaries in Ethiopia. He is also a coauthor of (Zondervan).

▼▲
Hays' book is an important step in both compelling us to embrace Scripture?s vision of multi-ethnic people of God as well compelling us to work for practical expressions of this vision in our own churches.