Ethiopia: The Living Churches of an Ancient Kingdom
By: Philip Marsden 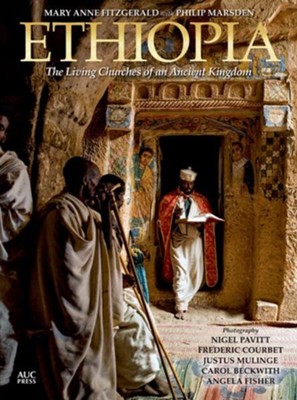 Ethiopia: The Living Churches of an Ancient Kingdom

▼▲
The ancient Axumite Kingdom, now a part of Ethiopia, was possibly the first nation in the world to convert to Christianity. In AD 340 King Ezana commissioned the construction of the imposing basilica of St. Mary of Tsion. It was here, the Ethiopians say, that Menelik, son of King Solomon and the Queen of Sheba, brought the Ark of the Covenant containing the Ten Commandments. By the fifth century, the Ethiopian Orthodox Church had spread beyond Axum into the countryside, aided by nine saints from Byzantium, and over the next ten centuries a series of spectacular churches were either built or excavated out of solid rock in the region, all of them in regular use to this day. Lalibela, a UNESCO World Heritage Site, has the best known cluster, but the northern state of Tigray, less famous and more remote, has many churches that are masterpieces of design.
Ethiopia: The Living Churches of an Ancient Kingdom traces the broad sweep of ecclesiastical history, legend, art, and faith in this sub-Saharan African kingdom and describes some seventy of the most breathtaking churches, with their astounding architecture, colorful decoration, and important religious festivals, all illustrated by more than eight hundred superb color photographs by some of the most celebrated international photographers of traditional cultures. This magnificent, large-format, full-color volume is the most comprehensive celebration yet published of the extraordinary Christian architectural and cultural heritage of Ethiopia.
Ethiopia is the third book on iconic sacred places published by Ludwig Publishing and the American University in Cairo Press, following the bestselling success of The Churches of Egypt and The History and Religious Heritage of Old Cairo.

▼▲
Mary Anne Fitzgerald has covered eastern Africa for the The Economist, the Financial Times, and The Sunday Times of London. She has also written eleven books on Africa, including Nomad, an account of African politics and war, which spent seven weeks on the bestseller list and a Time-Life Book Club choice. She has been visiting Ethiopia regularly for more than forty years and has traveled extensively throughout the country.

Philip Marsden is the award-winning author of a number of books of travel, history, and fiction. He visited Ethiopia several times in the 1980s before returning more recently to explore the northern highlands of Ethiopia on foot, a journey that he described in The Chains of Heaven: An Ethiopian Romance. His account of Emperor Tewodros is The Barefoot Emperor: An Ethiopian Tragedy. He is a fellow of the Royal Society of Literature, his work had been translated into fifteen languages, and he lives in Cornwall, UK, with his family and a number of boats.

Nigel Pavitt was born and educated in England but has lived in Kenya all his adult life. An accomplished photographer, he has written five books and his photographs have illustrated several others. He has traveled widely and first visited Ethiopia in 1968. A fellow of the Royal Geographical Society, Nigel has been honored with an MBE (Member of the British Empire) by Queen Elizabeth II in 1965 and an OGW (Order of the Grand Warrior of Kenya) by the President of Kenya in 1993.

Frederic Courbet was born in Belgium and started his photographic career in Europe. In 2005 he moved to Kenya to work as a freelance photographer and cameraman. From there, he covered more than fifteen countries in Africa and had his work published in many prestigious international newspapers and magazines such as The Guardian, The New York Times, Der Spiegel, Le Monde, Time magazine, and Newsweek. His work can also been seen in his long-lasting relationships with the Bill and Melinda Gates Foundation, GHR Foundation, and Girls Effect. Frederic now operates from Sydney, Australia.

Justus Mulinge is a young Kenyan photographer who lives in Nairobi with his wife and two sons. With his eye for detail, he was an important member of the photographic team for this book. His expertise in post-production has been invaluable.

Photographers Carol Beckwith and Angela Fisher have journeyed over 300,000 miles, through forty-five countries and recorded over two hundred African cultures. They have produced fifteen acclaimed books, including Maasai, Africa Adorned, African Ark, African Ceremonies, and Dinka: Legendary Cattle Keepers of Sudan. They received with the United Nations Award for Excellence for their "vision and understanding of the role of cultural traditions in the pursuit of world peace." They are presently working on African Twilight, a study of ceremonies across the continent from birth to death.

▼▲
I'm the author/artist and I want to review Ethiopia: The Living Churches of an Ancient Kingdom.
Back
×