Skip to main content
CYBER WEEK SALE! Spot great deals up to 88% off. >
Eternity in Their Hearts
By: Don Richardson
Stock No: WW215582 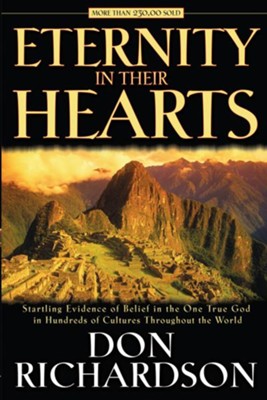 Eternity in Their Hearts

▼▲
Deep in Burma's jungle in 1795, tribesmen rush to greet a light-skinned stranger. Is he bringing the book their forefathers lost centuries ago---the book that tells about Y'Wa, the Supreme God? With this and other case studies, Richardson shows how God has prepared the way for the gospel by setting eternity in the hearts of men. 205 pages, softcover from Bethany.


Don Richardson, author of the bestselling book Peace Child, has studied cultures throughout the world and found startling evidence of belief in the one true God within hundreds of them. In Eternity in Their Hearts, Richardson gives fascinating, real-life examples of ways people groups have exhibited terms and concepts in their histories that have prepared them for the gospel. Read how Pachacuti, the Inca king who founded Machu Picchu, the majestic fortress in Peru, accomplished something far more significant than merely building fortresses, temples, or monuments. He sought, reached out, and found a God far greater than any popular "god" of his own culture. And there have been others throughout the world, like him, who lived to receive the blessing of the gospel.

Get ready to be amazed at these intriguing examples of how God uses redemptive analogies to bring all men to Himself, bearing out the truth from Ecclesiastes that God "has also set eternity in the hearts of men" (3:11).

▼▲
I'm the author/artist and I want to review Eternity in Their Hearts.
Back