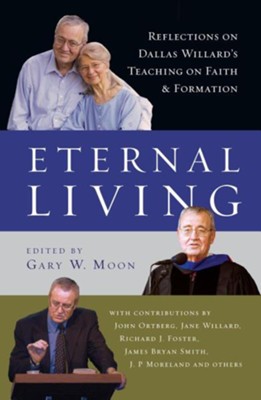 Curated by Gary Moon, director of the Dallas Willard Center, this medley of Dallas's wise teaching and lived model of Christlikeness-as well as snapshots and "Dallas-isms"-will move and motivate readers. Whether influenced by him as a family member, close friend, advisor, professor, philosopher, minister or reformer, contributors bring refreshing insight into not only his ideas and what shaped him, but also to his contagious theology of grace and joy.

▼▲
Dallas Willard spent his life making eternal living concrete for his friends. With his unexpected passing in 2013, the world lost a brilliant mind. The wide breadth of his impact inspired friends, family, colleagues, students and leaders of the church to gather their reflections on this celebrated yet humble theologian and philosopher. Richard Foster, a friend for over forty years, writes of Dallas: "He possessed in his person a spiritual formation into Christlikeness that was simply astonishing to all who were around him. Profound character formation had transpired in his body and mind and spirit until love, joy, peace, patience, kindness, goodness, faithfulness, gentleness and self-control were at the very center of the deep habit-structures of his life. He exhibited a substantively transformed life. Dallas was simply soaked in the presence of the living Christ." Curated by Gary Moon, director of the Dallas Willard Center, this medley of Dallas's wise teaching and lived model of Christlikeness—as well as snapshots and "Dallas-isms"—will move and motivate readers. Whether influenced by him as a family member, close friend, advisor, professor, philosopher, minister or reformer, contributors bring refreshing insight into not only his ideas and what shaped him, but also to his contagious theology of grace and joy. Contributors include:

▼▲
Gary Moon (PhD, Fuller Theological Seminary) is director of the Martin Family Institute and Dallas Willard Center for Spiritual Formation at Westmont College in Santa Barbara, California. He is also distinguished professor of psychology and Christian spirituality at Richmont Graduate University. He has been the editor in chief for the journal and he is the director of the Renovaré International Institute for Christian Spiritual Formation. He is the author of . John Ortberg is teaching pastor of Menlo Park Presbyterian Church and author of many books, including Richard J. Foster (D.Th.P., Fuller Theological Seminary) is founder of Renovaré in Denver, Colorado. He is the author of many books, including which has sold over two million copies worldwide, , and coauthor (with Gayle Beebe) of James Bryan Smith (MDiv, Yale University Divinity School, DMin, Fuller Seminary) is a theology professor at Friends University in Wichita, Kansas, and a writer and speaker in the area of Christian spiritual formation. He also serves as the director of the Apprentice Institute for Christian Spiritual Formation at Friends University. A founding member of Richard J. Foster's spiritual renewal ministry, Renovaré, Smith is an ordained United Methodist Church minister and has served in various capacities in local churches. Smith is also the editor of (with Richard Foster), and . J. P. Moreland (PhD, University of Southern California) is Distinguished Professor of Philosophy at Talbot School of Theology, Biola University, in La Mirada, California. He is the author, coauthor, or contributor to over ninety-five books, including , , , , , , , , and . In his distinguished career, Moreland has co-planted three churches, spoken and debated on over 175 college campuses around the country, and served with Campus Crusade for Christ for ten years. The founder and director of Eidos Christian Center, he also previously served as a bioethicist for PersonaCare Nursing Homes, Inc. headquartered in Baltimore, Maryland. Moreland?s ideas have been covered by both popular religious and non-religious outlets, including the , , PBS's "Closer to Truth," and magazine. In 2016 Moreland was selected by The Best Schools as one of the "50 most influential living philosophers." Dallas Willard (1935-2013) was a professor in the School of Philosophy at the University of Southern California in Los Angeles for over forty years. A highly influential author and teacher, Willard was as celebrated for his enduring writings on spiritual formation as he was for his scholarship. His books include ( Book of the Year in 1998), and others. His books have received numerous Annual Book Awards and other recognitions. Willard served on the boards of the C. S. Lewis Foundation and Biola University, and was a member of numerous evaluation committees for the Western Association of Schools and Colleges. He received bachelor?s degrees from both Tennessee Temple College and Baylor University and a graduate degree at Baylor University, as well as a PhD from the University of Wisconsin in Philosophy and the History of Science.

▼▲
I'm the author/artist and I want to review Eternal Living: Reflections on Dallas Willard's Teaching on Faith and Formation.
Back