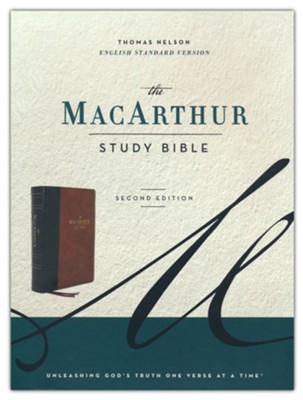 The MacArthur Study Bible has invited over 2 million readers around the world into the richness of God's Word. Now the pastoral ministry and biblical study of Dr. John MacArthur is available to you in this fully redesigned second edition. Join Dr. MacArthur as he guides you through difficult passages and illuminates familiar ones with verse-by-verse study notes, book introductions, and articles. Compiled with a heart of biblical authenticity bridled with an unparalleled commitment to interpretive precision- all with the purpose of making God known through His Word to those who believe.

Dr. John MacArthur's exhaustive study notes provide access to over 50 years of ministry to aid in a better understanding of God's word.

Over 2 million readers around the world have had their spiritual lives enriched and their understanding of God’s Word expanded by The MacArthur Study Bible. Drawing on more than fifty years of dedicated pastoral and scholarly work, Dr. John MacArthur’s verse-by-verse study notes, book introductions, and articles display an unparalleled commitment to interpretive precision—with the goal of making God known through His Word.

Widely known for his thorough, candid approach to teaching God's Word, John MacArthur is a popular author and conference speaker. He has served as pastor-teacher of Grace Community Church in Sun Valley, California, since 1969. John and his wife, Patricia, have four married children and fifteen grandchildren. John's pulpit ministry has been extended around the globe through his media ministry, Grace to You, and its satellite offices in seven countries. In addition to producing daily radio programs for nearly two thousand English and Spanish radio outlets worldwide, Grace to You distributes books, software, and digital recordings by John MacArthur. John is chancellor of The Master's University and Seminary and has written hundreds of books and study guides, each one biblical and practical. Bestselling titles include The Gospel  According to Jesus, Twelve Ordinary Men, Twelve Extraordinary Women, Slave, and The MacArthur Study Bible, a 1998 ECPA Gold Medallion recipient.

▼▲
I'm the author/artist and I want to review ESV MacArthur Study Bible, 2nd Edition--soft leather-look, brown.
Back
Back