Skip to main content
SPRING CYBER EVENT STARTS NOW: And it's a really BIG deal! Up to 88% off through 5/24>
ESV Gospel Transformation Study Bible, Hardcover
Stock No: WW563590 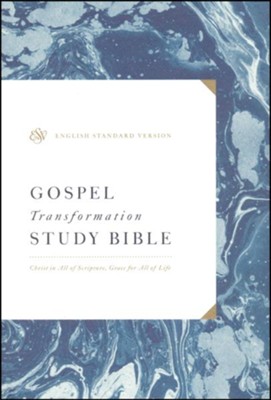 This product is part of our current Spring Cyber promotion.
Buy Item

Discover how the truths of God's Word apply to your daily life with the ESV Gospel Transformation Study Bible. This Bible provides informative book introductions, application-centered study notes, and a series of all-new articles by a team of over 50 pastors and scholars. Let the ESV Gospel Transformation Study Bible challenge you to think about how the timeless truths of the gospel apply to your life today.

Based on the original Gospel Transformation Bible released in 2013. Updates include design, typesetting, and new articles.

The ESV Gospel Transformation Study Bible features 375,000+ words of gospel-centered study notes, book introductions, and articles that explain passage-by-passage how God’s redemptive purposes culminate in the gospel and apply to the lives of believers today.

Paul F. M. Zahl (DTheol, University of Tuebingen) is a retired Episcopal minister and dean/president emeritus of Trinity Episcopal School for Ministry. He is the author of Grace in Practice.

L. Michael Morales (PhD, University of Bristol) is professor of biblical studies at Greenville Presbyterian Theological Seminary and the author of several books, including Who Shall Ascend the Mountain of the Lord?

V. Philips Long (PhD, Cambridge University) is professor of Old Testament at Regent College. He is the author of many books and commentaries and an ordained teaching elder in the PCA.

Frank Thielman (PhD, Duke University) is Presbyterian Chair of Divinity and professor of New Testament at Beeson Divinity School. He is also an ordained Presbyterian (PCA) minister and the author of many books and commentaries.

Ian K. Smith is the principal of Christ College, Sydney, where he also teaches Greek and New Testament. He has also served in parish ministry and as a missionary in the Pacific island nation of Vanuatu. He speaks regularly at churches, conferences, and other venues.

Willem A. VanGemeren is director of the Doctor of Philosophy in Theological Studies program and professor of Old Testament and Semitic languages at Trinity Evangelical Divinity School in Deerfield, Illinois.

Jay Sklar (PhD, University of Gloucestershire) is professor of Old Testament and vice president of academics at Covenant Theological Seminary.

Michael Horton (PhD, University of Coventry and Wycliffe Hall, Oxford) is the J. Gresham Machen Professor of Systematic Theology and Apologetics at Westminster Seminary in California. In addition to being the author of many popular and academic books, he is also the editor in chief of Modern Reformation magazine, a host of the White Horse Inn radio broadcast, and a minister in the United Reformed Churches.

Miles V. Van Pelt (PhD, The Southern Baptist Theological Seminary) is the Alan Belcher Professor of Old Testament and Biblical Languages, academic dean, and director of the Summer Institute for Biblical Languages at Reformed Theological Seminary, Jackson. He also serves on the pastoral staff of Grace Reformed Church in Madison, Mississippi. He and his wife, Laurie, have four children.

Kathleen Nielson (PhD, Vanderbilt University) is an author and speaker who loves working with women in studying the Scriptures. After directing the Gospel Coalition’s women’s initiatives from 2010–2017, she now serves as senior adviser and book editor for TGC. She and her husband, Niel, make their home partly in Wheaton, Illinois, and partly in Jakarta, Indonesia. They have three sons, two daughters-in-law, and five granddaughters.

Elyse Fitzpatrick (MA, Trinity Theological Seminary) is a counselor, a retreat and conference speaker, and the author of over twenty books, including Because He Loves Me; Comforts from the Cross; and Found in Him.

Bruce A. Ware (PhD, Fuller Theological Seminary) is T. Rupert and Lucille Coleman Professor of Christian Theology at the Southern Baptist Theological Seminary. He has written numerous journal articles, book chapters, and book reviews, and is the author of God's Lesser Glory and God's Greater Glory.

Kelly M. Kapic (PhD, King's College, University of London) is professor of theological studies at Covenant College, where he has taught for over fifteen years. Kapic has written and edited over ten books, focusing on the areas of systematic, historical, and practical theology. Kapic has also published articles in various journals and books. Kapic and his wife, Tabitha, live on Lookout Mountain with their two children.

Bryan Chapell is a bestselling author of many books, including Christ-Centered Preaching and Holiness by Grace. He is pastor emeritus of the historic Grace Presbyterian Church in Peoria, Illinois; president emeritus of Covenant Theological Seminary; and president of Unlimited Grace Media (unlimitedgrace.com), which broadcasts daily messages of gospel hope in many nations.

David R. Helm (MDiv, Gordon-Conwell Theological Seminary) serves as senior pastor of Christ Church Chicago. He also serves as chairman of the board of directors for the Charles Simeon Trust, an organization which promotes practical instruction in preaching. He is the coauthor (with Jon Dennis) of The Genesis Factor; a contributor to Preach the Word: Essays on Expository Preaching; and the author of The Big Picture Story Bible and 1 and 2 Peter and Jude in the Preaching the Word commentary series.

Michael J. Glodo (ThM, Westminster Theological Seminary) is associate professor of practical theology and dean of the chapel at Reformed Theological Seminary (Orlando). He is a contributor to to A Biblical-Theological Introduction to the Old Testament and the ESV Gospel Transformation Study Bible, as well as numerous articles, including at Reformed Faith & Practice.

COLIN S. SMITH is the senior pastor of The Orchard Evangelical Free Church in Arlington Heights, IL, where he has been since 1996. He is the author of The 10 Greatest Struggles of Your Life and can be heard on his Unlocking the Bible broadcast with Moody radio.

Jonathan Pennington (PhD, University of St Andrews) serves as professor of New Testament interpretation at Southern Baptist Theological Seminary and pastor of spiritual formation at Sojourn East church in Louisville, Kentucky. He is the author of several books including Reading the Gospels Wisely, The Sermon on the Mount and Human Flourishing, and Jesus the Great Philosopher.

Justin S. Holcomb (PhD, Emory University) is an Episcopal priest and teaches theology at Reformed Theological Seminary, Orlando. He serves on the boards of GRACE (Godly Response to Abuse in Christian Environments) and REST (Real Escape from the Sex Trade). Justin and his wife, Lindsey, live in Orlando, Florida, with their two daughters.

C. D. "Jimmy" Agan III (PhD, Aberdeen University) is professor of New Testament and director of homiletics at Covenant Theological Seminary in St. Louis, Missouri. He is the author of The Imitation of Christ in the Gospel of Luke: Growing in Christlike Love for God and Neighbor.

Stephen Um (PhD, University of St. Andrews) is the author of Micah for You and 1 Corinthians in the Preaching the Word series. Stephen and his wife, Kathleen, live in Boston, Massachusetts, with their three daughters.

Kevin DeYoung (PhD, University of Leicester) is the senior pastor at Christ Covenant Church in Matthews, North Carolina, and associate professor of systematic theology at Reformed Theological Seminary, Charlotte. He has written books for children, adults, and academics, including Just Do Something; Crazy Busy; and The Biggest Story. Kevin and his wife, Trisha, have nine children.

Jon M. Dennis (MDiv, Trinity Evangelical Divinity School; MLA, University of Chicago) is the founding pastor and senior pastor of Holy Trinity Church in Chicago, Illinois. He has helped to establish the church's four congregations and various ministries including Hope for Chicago, the Charles Simeon Trust, and the Chicago Partnership for Church Planting. He is the author of several books and is currently working to complete his doctorate of ministry at Westminster Theological Seminary. Jon and his wife, Amy, have five children.

Mike Bullmore (PhD, Northwestern University) serves as the senior pastor of Crossway Community Church in Bristol, Wisconsin. He was formerly professor of homiletics/practical theology and department chair at Trinity Evangelical Divinity School in Deerfield, Illinois. Mike lives in Kenosha, Wisconsin, with his wife, Beverly. They have three children.

▼▲
I'm the author/artist and I want to review ESV Gospel Transformation Study Bible, Hardcover.
Back
Back