Skip to main content
CYBER WEEK SALE! Spot great deals up to 88% off. >
ESV Church History Study Bible: Voices from the Past, Wisdom for the Present (Hardcover)
By: Stephen J. Nichols, Keith A. Mathison & Gerald Bray
Stock No: WW579681 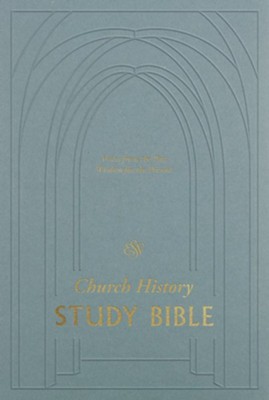 ESV Church History Study Bible: Voices from the Past, Wisdom for the Present (Hardcover)

The ESV Church History Study Bible is designed to help believers in all seasons of life understand the Bible with notes from over 300 of church history's most prominent figures.

Created for serious readers, students, and teachers of God's Word, the ESV Church History Study Bible highlights voices from the past offering wisdom for the present.

The ESV Church History Study Bible is designed to help believers in all seasons of life understand the Bible—featuring 20,000 study notes from church history’s most prominent figures.

Stephen J. Nichols (PhD, Westminster Theological Seminary) serves as the president of Reformation Bible College and chief academic officer of Ligonier Ministries. He has written over twenty books and is an editor of the Theologians on the Christian Life series. He also hosts the weekly podcast 5 Minutes in Church History.

Gerald Bray (DLitt, University of Paris-Sorbonne) is research professor at Beeson Divinity School and director of research for the Latimer Trust. He is a prolific writer and has authored or edited numerous books, including The Doctrine of God; Biblical Interpretation; God Is Love; and God Has Spoken.

Michael Reeves (PhD, King’s College, London) is president and professor of theology at Union School of Theology in Bridgend and Oxford, United Kingdom. He is the author of several books, including Delighting in the Trinity; Rejoice and Tremble; and Gospel People.

Gregory A. Wills (PhD, Emory University) is the dean of the school of theology and the David T. Porter Professor of Church History at the Southern Baptist Theological Seminary.

Herman Selderhuis is professor of church history at the Theological University Apeldoorn in the Netherlands and director of Refo500, the international platform focused on raising awareness for projects related to the legacy of the Reformation. He also serves as the director of the Reformation Research Consortium, president of the International Calvin Congress, and curator of research at the John à Lasco Library in Emden, Germany. He is the author or editor of several books, including John Calvin: A Pilgrim’s Life.

Lee Gatiss (PhD, University of Cambridge) is the director of Church Society and a lecturer in church history at Union School of Theology. He is chairman of The Global Anglican and on the editorial board of Studies in Puritanism and Piety. He has written and edited more than thirty books on the Bible, theology, and church history. He and his family serve at Christ Church, Cambridge in the United Kingdom.

Joel R. Beeke (PhD, Westminster Theological Seminary) has written over one hundred books. He is president and professor of systematic theology and homiletics at Puritan Reformed Theological Seminary; a pastor of the Heritage Reformed Congregation in Grand Rapids, Michigan; the editor of Banner of Sovereign Grace Truth; the editorial director of Reformation Heritage Books; the president of Inheritance Publishers; and the vice president of the Dutch Reformed Translation Society.

Peter J. Williams (PhD, University of Cambridge) is the principal of Tyndale House, Cambridge, the chair of the International Greek New Testament Project, and a member of the ESV Translation Oversight Committee. He is the author of Can We Trust the Gospels? and Early Syriac Translation Technique and the Textual Criticism of the Greek Gospels.

Chad Van Dixhoorn (PhD, Cambridge University) is professor of church history at Westminster Theological Seminary and a former pastor in the United Kingdom and in Virginia. He is the author of Confessing the Faith and God’s Ambassadors.

J. V. Fesko (PhD, University of Aberdeen, Scotland) is the academic dean and professor of systematic and historical theology at Westminster Seminary California. He was the pastor of Geneva Orthodox Presbyterian Church in Woodstock, Georgia, for ten years. J. V. lives in Escondido, California, with his wife, Anneke, and their three children.

Conrad Mbewe (PhD, University of Pretoria) serves as pastor of Kabwata Baptist Church in Lusaka, Zambia, and founding chancellor of the African Christian University. Conrad has authored over nine books and contributed to many others. He and his wife, Felistas, have three children and three foster children.

John W. Tweeddale (PhD, University of Edinburgh) is academic dean and professor of theology at Reformation Bible College. He is also a teaching elder in the Presbyterian Church in America. He is the author of John Owen and Hebrews and served as an assistant editor of the Reformation Study Bible.

Gavin Ortlund (PhD, Fuller Theological Seminary) serves as senior pastor of First Baptist Church of Ojai in Ojai, California. He is the author of several books and runs the popular YouTube channel Truth Unites. Gavin and his wife, Esther, have five children.

▼▲
I'm the author/artist and I want to review ESV Church History Study Bible: Voices from the Past, Wisdom for the Present (Hardcover).
Back