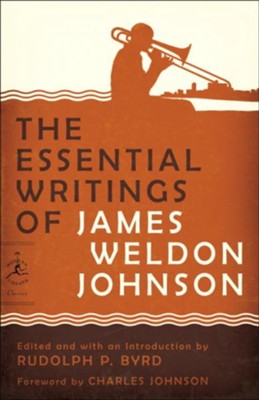 One of the leading voices of the Harlem Resaissance and a crucial literary figure of his time, James Weldon Johnson was also an editor, songwriter, founding member and leader of the NAACP, and the first African American to hold a diplomatic post as consul to Venezuela and Nicaragua. This comprehensive volume of Johnson’s works includes the seminal novel Autobiography of an Ex-Colored Man, poems from God’s Trombones, essays on cultural and political topics, selections from Johnson’s autobiography, Along This Way, and two previously unpublished short plays: Do You Believe in Ghosts? and The Engineer. Featuring a chronology, bibliography, and a Foreword by acclaimed author Charles Johnson, this Modern Library edition showcases the tremendous range of James Weldon Johnson’s writings and their considerable influence on American civic and cultural life.

Rudolph P. Byrd is professor of American studies and founding director of the James Weldon Johnson Institute at Emory University. His books include Charles Johnson’s Novels: Writing the American Palimpsest.

Charles Johnson is the National Book Award-winning author of Middle Passage and Dreamer.

▼▲
I'm the author/artist and I want to review The Essential Writings of James Weldon Johnson - eBook.
Back
Back