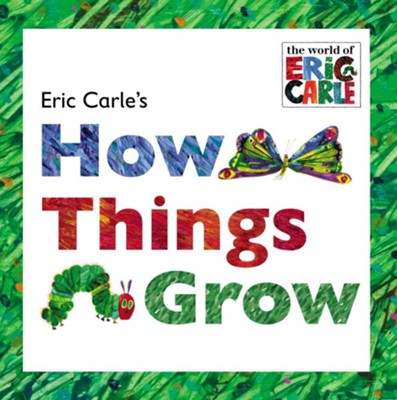 ▼▲
A brand-new title in this bestselling series from Eric Carle!

A tadpole becomes a frog, an acorn becomes an oak tree, and a caterpillar becomes a butterfly. By lifting the big, sturdy flaps, young readers will discover the world around them and how things grow through Eric Carle's bright, beautiful images. A perfect companion title for Eric Carle’s ABC, Opposites, and All Around Us.

▼▲
Eric Carle is the acclaimed and beloved creator of brilliantly illustrated and innovatively designed picture books for very young children. His best-known work, The Very Hungry Caterpillar, has eaten its way into the hearts of literally millions of children all over the world and has been translated into more than 50 languages and sold over 33 million copies. Since the Caterpillar was published in 1969, Eric Carle has illustrated more than seventy books, many best sellers, most of which he also wrote, and more than 110 million copies of his books have sold around the world. Eric Carle recently won the Laura Ingalls Wilder Award for Lifetime achievement in children's literature, and his books, as well as the new Eric Cale Museum of Picture Book Art in Amherst, Massachusetts, continue to keep him at top momentum. Eric Carle has two grown-up children, a son and a daughter. With his wife, Barbara, he divides his time between the Florida Keys and the hills of North Carolina. Visit him at www.eric-carle.com.

▼▲
I'm the author/artist and I want to review Eric Carle's How Things Grow.
Back