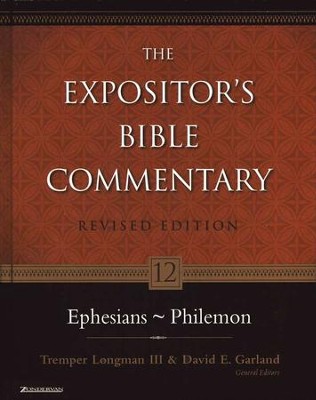 ▼▲
Whether they are addressed to an individual or a church, Paul's letters offer a firsthand account of daily life and challenges experienced by early believers. This revised commentary provides pastors and students with a detailed exegesis of Paul's correspondence; references to translations and original languages; book introductions; textual notes; transliterated Semitic and Greek words; and a concise bibliography.

William W. Klein (PhD, Aberdeen) is professor of New Testament at Denver Seminary. He is author of The New Chosen People: A Corporate View of Election and a commentary on Ephesians in the Expositor’s Bible Commentary: Revised Edition and serves as both editor and co-author of Introduction to Biblical Interpretationwith Craig Blomberg and Robert Hubbard. Bill and his wife have two daughters and reside in Littleton, Colorado.

Todd D. Still (Ph. D., University of Glasgow, Scotland) serves as the William M. Hinson Professor of Christian Scriptures (New Testament and Greek) at the George W. Truett Theological Seminary of Baylor University in Waco, Texas. In addition to having written Colossians for the revised edition of The Expositor's Bible Commentary, Dr. Still is the author of Conflict at Thessalonica as well as Philippians & Philemon. He is also the (co-) editor of several volumes (including Jesus and Paul Reconnected, After the First Urban Christians, and Tertullian and Paul) and has published articles in such scholarly journals as New Testament Studies, Journal of Biblical Literature, and Catholic Biblical Quarterly.

Robert L. Thomas (PhD, Dallas Theological Seminary) is professor of New Testament at The Master’s Seminary. He is the author or coauthor of numerous books and other works, including the commentaries on 1 and 2 Thessalonians in the Holt series.

Dr. Andreas Kostenberger is theologian in residence at Fellowship Raleigh, cofounder of Biblical Foundations, and author, editor, or translator of over sixty books. He and his wife Marny have four grown children and live in North Carolina.

Q: Which NIV Translation is used Does the revised edition use the latest NIV translation, or the 1984 edition?

This volume uses the NIV 1984 edition.

▼▲
I'm the author/artist and I want to review Ephesians-Philemon, Revised: The Expositor's Bible Commentary.
Back
Back