Skip to main content
CUSTOMER APPRECIATION SALE: Thousands of starry deals through 6/22!
Ephesians: A Handbook on the Greek Text
By: William J. Larkin
Stock No: WW580664 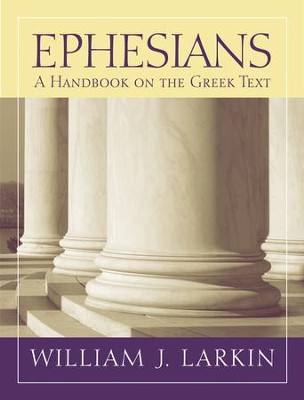 Sample Pages
Buy Item Our Price$37.49
5 out of 5 stars for Ephesians: A Handbook on the Greek Text (2 Reviews)
In Stock
Quantity:
Stock No: WW580664
Baylor University Press / 2009 / Paperback
Quantity:
Add To Cart
of These in Your Cart

Ephesians: A Handbook on the Greek Text

▼▲
This volume in the Baylor Handbooks on the Greek New Testament series, William Larkin provides students with a reliable guide through the intricacies of the Greek text of Ephesians, introducing them to consensus views on matters of syntax, semantics, and textual criticism. In addition, the annotations contain references to current debates relating to the language of Ephesians. Larkin's annotations demonstrate that linguistically informed analyses which have appeared in the last couple of decades frequently shed light on old questions.

The Baylor Handbook on the Greek New Testament [BHGNT] is designed to guide new readers and seasoned scholars alike through the intricacies of the Greek text. Each handbook provides a verse-by-verse treatment of the biblical text. Unlike traditional commentaries, however, the BHGNT makes little attempt to expound on the theological meaning or significance of the text under consideration. Instead the handbooks serve as "prequals" to commentary proper.

Finally, while the BHGNT series does not consider modern linguistic theory to be the ultimate authority in all matters of exegesis, it does aim both to help move linguistic insights into the mainstream of NT reference works and, at the same time, help weed out remaining myths in popular and academic literature about the language.Key Elements

Authors deal mainly with the grammatical construction of the text, and are generally not concerned with theological or historical/authorship matters

Ephesians: A Handbook on the Greek Text offers teachers and students a comprehensive guide to the grammar and vocabulary of Ephesians. A perfect supplement to any commentary, this volume’s lexical, analytical, and syntactical analysis is a helpful tool in navigating New Testament literature. William J. Larkin leads students toward both a greater understanding of the Greek text and an appreciation for the textual and rhetorical intricacies not available in English translations.

This book is a worthy addition to the BHGNT series.... The grammatical analysis is comprehensive and informed by contemporary linguistic studies. The literary structure of Ephesians is not neglected, and testual issues are given some attention where deemed necessary.

▼▲
I'm the author/artist and I want to review Ephesians: A Handbook on the Greek Text.
Back
Back