Skip to main content
Am I Enough? Embracing the Truth About Who You Are
By: Grace Elaine Valentine
Stock No: WW216179 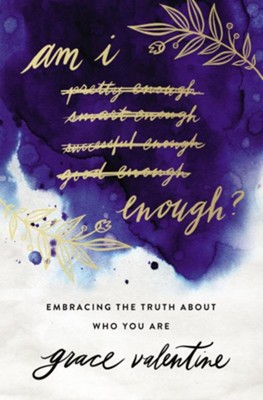 Am I Enough? Embracing the Truth About Who You Are

Have you had enough?

Young women today are constantly told they are not enough for this world-not pretty enough, not smart enough, not exciting enough, not spiritual enough, and just plain not good enough. The barrage is constant. The consequences are real. The damage often feels permanent.

As a young woman herself, Grace Valentine has felt the pressure of trying to survive in a toxic culture, let alone thrive. But she's had enough. With an engaging combination of honesty and humor, Grace uses her story to confront the lies the world tells us every day-lies such as:

Am I Enough? is a line in the sand. It's a declaration that we will never be enough for this world because we were not created for this world. Instead, Grace reminds us that we were created by Someone better for something better. We can choose the One who has chosen us-the One who says: "You are enough for Me, My child. Come as you are."

Grace Valentine is an author, blogger, podcast host, and speaker. Her readers love the fact that she is young, ordinary, and relatable; they say her fresh voice helps them navigate their own faith and life. Grace’s mission is to show others that Christianity is not lame--it is an adventure worth living.

Grace grew up near New Orleans, Louisiana, in a suburban town called Mandeville. She graduated from Baylor University in 2018 with a degree in journalism. She currently resides in Orlando, Florida, where she enjoys going on runs and eating lots of sushi. You can find Grace on Instagram @thegracevalentine; her podcast, I’m Tired; Twitter @GraceV96; or her website, GraceValentine.org. Grace loves connecting with her readers, so send her a message!

▼▲
I'm the author/artist and I want to review Am I Enough? Embracing the Truth About Who You Are.
Back
Back