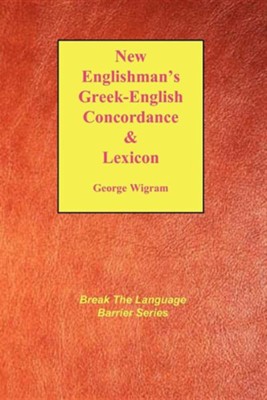 ▼▲
Though the concordance has always borne the name of Wigram (since 1848), Wigram was involved only in the conception of the project, and the financing of the work being done by others, including students. It is of course a monumental task to compile such a concordance. Likewise, Jay P. Green, Sr., the Revising Editor, was not involved in doing the initial work on The Concise Lexicon. The project was conceived by Dr. Maurice Robinson, and he recruited other scholars to do the work. Then after financing it, the Editor did the typesetting, styling, and publication.This concordance lists every Greek word in the order of the Greek Alphabet. And under that word appears an English print-out of every place where that original Greek word appears in the Bible (English words of the Concordance are from the KJV).. The good news is that it is an even finer study tool now that it is coded with Strong's numbers. In addition it gives page references to Thayer's Greek-English Lexicon, Arndt-Gingrich Greek-English Lexicon, and, Kittel's Theological Dictionary. A further improvement, and a major one which is unavailable in any other edition, is the lexicon entry at the head of each concordance word. This gives much information, such as giving the meanings, scriptural examples, parts of speech, identification of persons and places, etymology, etc. The entire Greek portion of The Concise Lexicon to the Biblical Languages thus is included in this volume. It is a dream to use, both for the highly trained and for anyone with a desire to know what God has written. The precision of God the Spirit's choices of words and their divine placement in each of the contexts where they appear, furnishes many outbreaks of glee to anyone who appreciates the fine art of communication. The combination of lexicon and concordance is a wonderful aid to quick spiritual learning.

▼▲
I'm the author/artist and I want to review New Englishman's Greek-English Concordance with Lexicon.
Back