Skip to main content
Engaging with God: A Biblical Theology of Worship - eBook
By: David Peterson
Stock No: WW85732EB 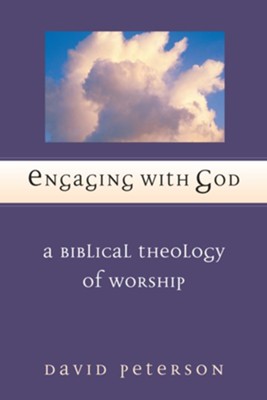 Engaging with God: A Biblical Theology of Worship - eBook

▼▲
Worship is of immense concern in the church and ironically the source of controversy and dispute. Can we get behind the question of what style of worship we should engage in to understand the bedrock foundation for God's people--honoring him as he desires? Is the dissatisfaction with worship voiced by so many perhaps a result of our having wandered from biblical teaching on the subject? Through careful exegesis in both Old and New Testaments, David Peterson unveils the total life-orientation of worship that is found in Scripture. Rather than determining for ourselves how we should worship, we, his people, are called to engage with God on the terms he proposes and in the way he alone makes possible. This book calls for a radical rethinking of the meaning and practice of worship, especially by those responsible for leading congregations. Here is the starting place for recovering the richness of biblical worship.

▼▲
David Peterson was senior research fellow and lecturer in New Testament at Moore Theological College, Sydney, where he still teaches part time. He served as principal of Oak Hill College, London, from 1996 to 2007. His books include Engaging with God, Possessed by God (both IVP) and Hebrews and Perfection (Cambridge University Press). I. Howard Marshall (1934-2015) was a world-renowned New Testament scholar and the author or editor of at least thirty-eight books and more than 120 essays and articles. He taught New Testament at the University of Aberdeen for thirty-five years and was a professor emeritus for sixteen years. Among his numerous publications on the New Testament are his commentaries on the Gospel of Luke, Acts, 1-2 Thessalonians, the Pastoral Epistles and 1 Peter and 1-3 John. He is coauthor of and coeditor of the New International Greek Testament Commentary series, as well as the author of the series' volume on Luke. He has also authored Marshall was an evangelical Methodist who was born and lived most of his life in Scotland. He received a PhD from the University of Aberdeen and a DD from Asbury Theological Seminary.

▼▲
"Peterson has researched 160 books in preparation for this project, which speaks to his thoroughness. My guess is that he found every instance of worship in the Bible. Recommend this book to your pastor, worship leaders, and Bible teachers; but warn them that it is deep reading. Each chapter concludes with a summary in laymen's terminology, which helps make it more readable." -- Cindy Grabill, Church Libraries, Summer 2010

▼▲
I'm the author/artist and I want to review Engaging with God: A Biblical Theology of Worship - eBook.
Back
Back