Skip to main content
WINTER BIBLE SALE: Over 1,200 Deals Up to 80% Off, thru 2/1. Shop Now >
Engaging the Doctrine of God: Contemporary Protestant Perspectives
By: Bruce L. McCormack
Stock No: WW035524 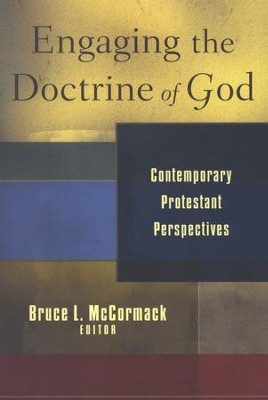 ▼▲
Evangelical theologians have traditionally affirmed a classical theism that emphasizes God's unchangeableness and all-knowing nature. Recent years, however, have seen the development of a variety of opinions, including the controversial ideas connected with "open theism."

The contributors to this collection represent the broad range of creative thought characteristic of contemporary evangelicalism. Figures such as N. T. Wright, D. A. Carson, Paul Helm, John Webster, and Bruce McCormack discuss an array of ideas currently under debate by evangelical theologians. Both ministers and students of theology will find this a helpful and insightful volume. The contributors offer readers a valuable look at contemporary evangelical perspectives on the doctrine of God and the importance of theology for other areas of belief and practice.

▼▲
Bruce L. McCormack (PhD, Princeton Theological Seminary; Dr. theol. h.c., Friedrich Schiller University) is the Frederick and Margaret L. Weyerhaeuser Professor of Systematic Theology at Princeton Theological Seminary. A world-renowned Barth scholar, he is a frequent writer and lecturer on topics of Reformed theology and is the author of Karl Barth's Critically Realistic Dialectical Theology and the editor of Justification in Perspective.

▼▲
Internationally acclaimed scholars offer a progress report on evangelical thinking about God's being and attributes in light of current controversies.

Traditionally, evangelical theology has been committed to a position of classical theism, emphasizing God's immutability and omniscience. Of late, traditional affirmations have been challenged by theologians who affirm a more christological focus (often drawing from Karl Barth's theology) and by those who affirm a theology of "open theism."

The essays gathered in this collection give evidence of the depth and creativity of contemporary evangelical theology as well as the variety of positions held by those within the movement. Part one focuses on New Testament studies and the earliest development of a Christian doctrine of God. Part two considers two figures who have widely influenced evangelical theology. Part three considers opinions on the cross, the suffering and sovereignty of God, and the contemporary debate, and part four concludes with a chapter on theology and pastoral care.

Both scholars and clergy will find that these essays represent the entire range of thought within the evangelical tradition. The contributors provide readers with a stimulating guide to the contemporary debate.

▼▲
I'm the author/artist and I want to review Engaging the Doctrine of God: Contemporary Protestant Perspectives.
Back
Back