Skip to main content
CYBER WEEK SALE! Spot great deals up to 88% off. >
Engaging the Competition (With This Ring? Collection): A Teaville Moral Society Novella - eBook
By: Melissa Jagears
Stock No: WW81441EB 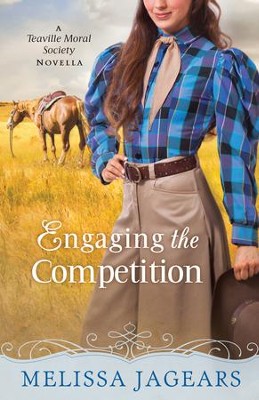 Engaging the Competition (With This Ring? Collection): A Teaville Moral Society Novella - eBook

Ever since Charlotte Andrews bested four-eyed Harrison Gray in a shooting competition when they were teenagers, he decided a tough, show-off girl like Charlie didn't need him to look after her. Now a teacher at the local school, Harrison learns Charlie intends to marry a neighbor who comes from a long line of no-good troublemakers and, for some inexplicable reason, it falls to him to talk some sense into her...if she has any under that tomboy exterior.

Their heated confrontation unfortunately takes place right as a bad storm is coming on and, in the melee of arguing and taking shelter, Harrison's glasses are knocked off his face and broken when Charlie's horse crushes them under a hoof. Harrison and Charlie may have their differences, but she can see from his panic that the loss of his glasses is a blow to him. She volunteers to help him at school until his new pair of special order glasses arrive despite knowing the one place she can't best Harrison is in the classroom. Readers will have fun being introduced to the characters of Melissa's Teaville Moral Society series!

▼▲
Carol Award-winning author Melissa Jagears is a homeschooling mom who writes Christian historical romance into the wee hours of the night. She's the author of the Unexpected Brides series, the Teaville Moral Society series, and Love by the Letter, a free prequel ebook novella. You can learn more about Melissa, her books, and where she hangs out online at www.melissajagears.com.

▼▲
I'm the author/artist and I want to review Engaging the Competition (With This Ring? Collection): A Teaville Moral Society Novella - eBook.
Back
Back