Skip to main content
My Enemy, My Heart: unabridged audio book on MP3-CD
By: Laurie Alice Eakes
Stock No: WW863517 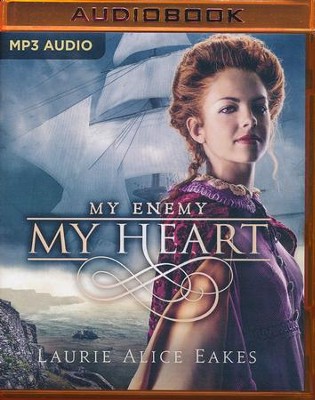 My Enemy, My Heart: unabridged audio book on MP3-CD

▼▲
It's the War of 1812, when during a voyage to America aboard the clipper, the captain's daughter Deirdre loses her family when they are captured and treated like prisoners. Kieran regrets being tempted to move up the ladder by capturing the crew. Now he wants to make up for his wrong doings. As she struggles to save them, redemption may be her only hope.

The sea is Deirdre MacKenzie’s home, and the crew of her father’s Baltimore clipper is the only family she loves. She’s happier wearing breeches and climbing the rigging of the Maid of Alexandria than donning a dress and learning to curtsy. But when the War of 1812 erupts, the ship is captured by a British privateer, leaving her father, the captain, dead. Deirdre watches her crew herded into the hold, destined for the notorious Dartmoor prison in England. Though her fate as a noncombatant is uncertain, she knows she must find a way to free her crew.

Kieran Ashford has caused his family one too many scandals. On his way to exile in America, he is waylaid by the declaration of war and a chance to turn privateer and make his own fortune. But he regrets his actions as soon as the rich prize is secured. Now his best chance at redeeming himself in the eyes of his family is to offer Deirdre the protection of his name in marriage.

But love and loyalty clash as Kieran begins to win Deirdre’s heart despite her plot to betray him. Will Kieran’s plan mend the relationship with his family, and can this fated couple find true love despite the secret lies between them?

Laurie Alice Eakes lay in bed as a child telling herself stories and dreaming of becoming a published writer. She is now a bestselling, award-winning author with nearly two dozen books in print. Romantic Times writes: “Eakes has a charming way of making her novels come to life without being over the top.”

Laurie Alice has a degree in English and French from Asbury University and a master’s degree in fiction writing from Seton Hill University. She lives in Texas with her husband and sundry pets. She loves watching old movies with her husband in the winter and going for long walks along Galveston beaches in the summer. When she isn’t writing, she’s doing housework, which she considers time to work out plot points, and visiting museums as a recreational activity. For more information about Laurie Alice and her books, visit www.lauriealiceeakes.com.

▼▲
I'm the author/artist and I want to review My Enemy, My Heart: unabridged audio book on MP3-CD.
Back
Back