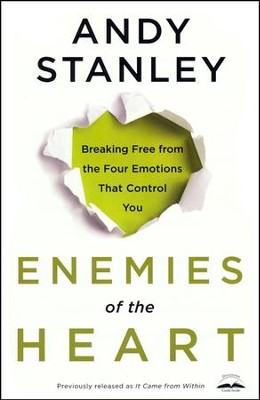 Enemies of the Heart: Breaking Free from Emotions That Control You

▼▲
Do you have a chronic heart condition? Not angina or arrhythmia---but guilt, anger, greed, or jealousy? These four emotions undermine our relationships and cause us to miss out on God's best. Learn how to diagnose your infirmities and then turn to the Master Physician for healing. Previously published as It Came from Within! 224 pages, softcover from Multnomah.

"Andy Stanley touches the right nerve at the right time."—Shaunti Feldhahn, bestselling author of For Women Only and For Men Only

The difficult circumstances you are dealing with today are likely being fed by one of four emotional forces that compels you to act in undesirable ways, sometimes even against your will.

Andy Stanley explores each of these destructive forces—guilt, anger, greed, and jealousy—and how they infiltrate your life and damage your relationships. He says that, left unchallenged they have the power to destroy your home, your career, and your friendships.

In Enemies of the Heart, Andy offers practical, biblical direction to help you fight back, to take charge of those feelings that mysteriously control you, and to restore your broken relationships.

Previously released as It Came from Within

Praise for Enemies of the Heart

"Andy Stanley touches the right nerve at the right time. We all have an understandable tendency to focus on the problems others need to address in their lives. But Andy encourages us to put ourselves on the hook and not let go until we’ve made any necessary changes. This book shined a spotlight on some of those areas I need to work on, and
I know it will do the same for you."
—Shaunti Feldhahn, best-selling author of For Women Only

"Andy Stanley is a master teacher for a generation that loves to be taught. Here is yet more proof of Andy’s ability to take us deep in a way that makes us want to go there. This is a great book."
—Dave Ramsey, New York Times best-selling author and nationally syndicated radio host

"Read this book with caution! You will probably uncover some mean and ugly stuff in the depths of your own heart. I sure did. The good news is that Andy Stanley doesn’t leave you there to struggle; instead, he offers wise, biblical remedies that every Christian should make part of their own spiritual habits. This is great stuff that I enjoyed teaching
at our church."
—Doug Fields, former associate pastor, Saddleback Church

▼▲
I'm the author/artist and I want to review Enemies of the Heart: Breaking Free from Emotions That Control You.
Back
Back