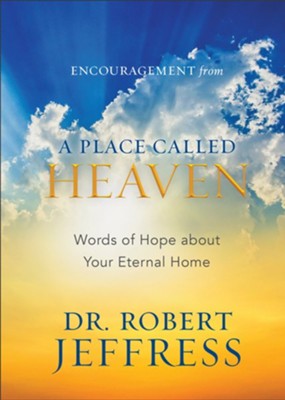 Encouragement from A Place Called Heaven: Words of Hope about Your Eternal Home / Special edition - eBook

▼▲
As we face the realities of our broken world, where misunderstanding and violence tear people apart and sickness ravages the globe, we reach out for some hope to hold on to. The greatest hope we have is the promise of heaven. But so many of us know so little about what awaits us after this life is over, and what we do know is often influenced far more by TV and movies than God's Word.

With powerful biblical truths drawn from his bestselling book A Place Called Heaven, Dr. Robert Jeffress offers much-needed comfort, hope, and encouragement to the hurting and fearful in a portable and easily digestible format. Filled with inspiring Scripture, breathtaking photos, and words of wisdom, this beautiful book is the perfect gift for anyone going through stressful times, struggling with chronic illness, or grieving the loss of a loved one.

▼▲
Dr. Robert Jeffress is senior pastor of the 14,000-member First Baptist Church, Dallas, Texas, and is a Fox News contributor. His daily radio program, Pathway To Victory, is heard on more than 1,000 stations nationwide, and his weekly television program is seen in 195 countries around the world. Known for his bold, biblical stands on cultural issues, Jeffress has made more than 4,000 guest appearances on various radio and TV programs and regularly appears on major mainstream media outlets such as Fox News channel's Fox & Friends, Hannity, Shannon Bream, Varney and Co., and Judge Jeanine; ABC's Good Morning America; and HBO's Real Time with Bill Maher. He is the author of more than 25 books, including Not All Roads Lead to Heaven, A Place Called Heaven, Choosing the Extraordinary Life, Courageous, and Invincible. He lives in Dallas.

▼▲
I'm the author/artist and I want to review Encouragement from A Place Called Heaven: Words of Hope about Your Eternal Home / Special edition - eBook.
Back
Back