Skip to main content
SPRING CYBER SALE: The sale you've been waiting for! Up to 85% off through 5/25>
Encounters with Jesus: Unexpected Answers to Life's Biggest Questions - eBook
By: Timothy Keller
Stock No: WW49561EB 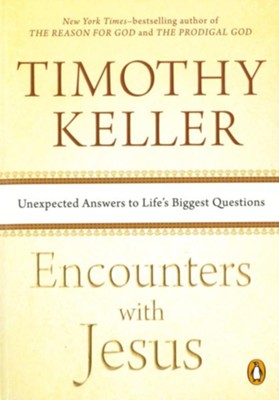 Buy Item Our Price$6.99
5 out of 5 stars for Encounters with Jesus: Unexpected Answers to Life's Biggest Questions - eBook (2 Reviews)
In Stock
Stock No: WW49561EB
Penguin Books / 2013 / ePub
Add To Cart
of These in Your Cart

By: Timothy Keller
Penguin Books / 2013 / ePub
5 out of 5 stars for Encounters with Jesus: Unexpected Answers to Life's Biggest Questions - eBook (2 Reviews) Write a Review
In Stock
Stock No: WW49561EB

New York Times-bestselling author Timothy Keller explores how people are changed by meeting Jesus personally - and how we can be changed encountering him today.

What is my purpose in life? What is a good life? Why is there so much wrong with our world? What can I do to help make it right?

These are some of the big questions that everyone confronts in life. For many of us, the answers, we think, are elusive, even out of reach. But we're wrong. What we must do, Timothy Keller says in Encounters with Jesus, is understand that any lasting change in our lives will start with a change to one or more of our answers to these questions.

Keller knows that Jesus changed the life of every person he met in the Gospels, through powerful experiences and words that led them to unexpected and transforming answers to their big questions. These profound conversations can still address our questions and doubts today. Encounters with Jesus focuses on several of these meetings Jesus had with others - including with a skeptical student, a religious insider, an outcast, even his mother - and shows how the central events in Jesus' life provide ways for us to encounter him again or for the first time.

▼▲
New York Times bestselling author of The Prodigal Prophet Timothy Keller explores how people are changed by meeting Jesus personally—and how we can be changed encountering him today.

The people who met Jesus Christ in person faced the same big life questions we face today. Like most of us, the answers handed down to them didn’t seem to work in the real world. But when they met Jesus, things immediately started to change for them. It seems he not only had the answers—he was the answer. In Encounters with Jesus, Timothy Keller shows how the central events and meetings in Jesus’ life can change our own lives forever.

"Keller's work belongs on the bookshelf of every serious Bible student." —Examiner

"Keller has mined the gold from these texts of Scripture, and any Christian is bound to have their minds expanded and hearts stirred." —Grace for Sinners

▼▲
Timothy Keller was born and raised in Pennsylvania and educated at Bucknell University, Gordon-Conwell Theological Seminary, and Westminster Theological Seminary. His first pastorate was in Hopewell, Virginia. In 1989 he started Redeemer Presbyterian Church in New York City with his wife, Kathy, and their three sons. Today, Redeemer has nearly six thousand regular Sunday attendees and has helped to start more than three hundred new churches around the world. He is the author of Hidden Christmas, Making Sense of God, The Songs of Jesus, Preaching, and Prayer, as well as The Meaning of Marriage, The Prodigal God, and The Reason for God, among others.

▼▲
Praise for Timothy Keller and Encounters with Jesus

"Keller's work belongs on the bookshelf of every serious Bible student. It is not a quick read, but, instead should be savored like fine wine, one sip at a time to glean the full impact of his life-changing message." —Examiner

"Keller has mined the gold from these texts of Scripture, and any Christian is bound to have their minds expanded and hearts stirred, even if they have read these accounts countless times." —Grace for Sinners

"Unlike most suburban megachurches, much of Redeemer is remarkably traditional. What is not traditional is Dr. Keller's skill in speaking the language of his urbane audience. . . . It's easy to understand his appeal." —The New York Times

"Reverend Tim Keller [is] a Manhattan institution, one of those open urban secrets, like your favorite dim sum place, with a following so ardent and so fast-growing that he has never thought to advertise." —Newsweek

"The most successful Christian Evangelist in [New York City] . . . With intellectual, brimstone-free sermons that manage to city Woody Allen alongside Matthew, Mark, Luke, and John, Keller draws some five thousand young followers every Sunday. Church leaders see him as a model of how to evangelize urban centers across the country, and Keller has helped 'plant' fifty gospel-based Christian churches around New York plus another fifty from San Francisco to London." —New York

"Using literature, philosophy, and pop culture, the author gives convincing reasons for a strong belief in God. It is refreshing to read a book that presents a religious view without being overly critical of the secular side presented in other books." —Library Journal

"It's a provocative premise, in pursuit of which Keller—known for drawing cosmopolitan urbanites to his Redeemer Presbyterian Church in Manhattan—takes on nonbelievers from evolutionary biologists to the recent rash of atheist authors." —The Boston Globe

▼▲
I'm the author/artist and I want to review Encounters with Jesus: Unexpected Answers to Life's Biggest Questions - eBook.
Back
Back