Shipment delay - click here for more details
Encountering Religion in the Workplace: The Legal Rights and Responsibilities of Workers and Employers
By: Raymond F. Gregory 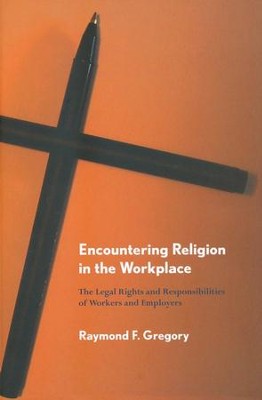 Encountering Religion in the Workplace: The Legal Rights and Responsibilities of Workers and Employers

▼▲
In a recent survey, 20 percent of the workers interviewed reported that they had either experienced religious prejudice while at work or knew of a coworker who had been subjected to some form of discriminatory conduct. Indeed, according to the Equal Employment Opportunity Commission, the filing of religious discrimination charges under Title VII of the Civil Rights Act of 1964 (which prohibits discrimination in employment based on race, color, national origin, sex, and religion) increased 75 percent between 1997 and 2008.

The growing desire on the part of some religious groups to openly express their faith while at work has forced their employers and coworkers to reconsider the appropriateness of certain aspects of devotional conduct. Religion in the workplace does not sit well with all workers, and, from the employer s perspective, the presence of religious practice during the workday may be distracting and, at times, divisive. A thin line separates religious self-expression by employees and employers from unlawful proselytizing.

In Encountering Religion in the Workplace, Raymond F. Gregory presents specific cases that cast light on the legal ramifications of mixing religion and work in the office, on the factory floor, even within religious organizations. Court cases arising under Title VII and the First Amendment must be closely studied, Gregory argues, if we are to fully understand the difficulties that arise for employers and employees alike when they become involved in workplace disputes involving religion, and his book is an ideal resource for anyone hoping to understand this issue.

▼▲
I'm the author/artist and I want to review Encountering Religion in the Workplace: The Legal Rights and Responsibilities of Workers and Employers.
Back
×
Back
×