Skip to main content
MOTHER'S DAY SALE: Books, Bibles, and more at no-nonsense prices through April 20th. >
Encountering Heaven and the Afterlife: True Stories from People Who Have Glimpsed the World Beyond
By: James L. Garlow, Keith Wall
Stock No: WW208119 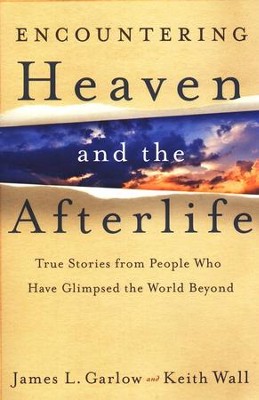 Encountering Heaven and the Afterlife: True Stories from People Who Have Glimpsed the World Beyond

By: James L. Garlow, Keith Wall
Bethany House / 2010 / Paperback
4.5 out of 5 stars for Encountering Heaven and the Afterlife: True Stories from People Who Have Glimpsed the World Beyond (6 Reviews) Write a Review
In Stock
Stock No: WW208119

▼▲
How thin is the veil that separates this life from the next? What's eternity like? How do angels and demons interact with us now and in the hereafter? Offering a clear picture of what awaits us when we "cross over," Garlow and Wall share credible stories of near-death experiences and real-life encounters with spiritual beings. These gripping true stories written from a biblical perspective provide fascinating glimpses into the spiritual world around us and the one that awaits.

▼▲
What happens when we die? What is heaven really like? How do spiritual beings--angels and demons--interact with us here and in the hereafter? Real-life, credible stories of near-death experiences and spiritual encounters gathered by the authors of Heaven and the Afterlife paint a clearer, fuller picture of exactly what readers can expect when it's their turn to "cross over." These gripping true stories--written from a solidly biblical perspective but accessible to seekers--provide fascinating glimpses into the spiritual world around us and the one that awaits us.

▼▲
James L. Garlow is the coauthor of Cracking Da Vinci's Code, with half million in print. He is the senior pastor of Skyline Wesleyan Church in San Diego and a speaker at pastors' and leaders' conferences. Jim has master's degrees from Princeton Theological Seminary and Asbury Theological Seminary and a PhD in historical theology from Drew University. He speaks nationwide and has appeared on CNN, MSNBC, CNBC, FOX, and NBC. His daily radio commentary, The Garlow Perspective, can be heard on nearly five hundred radio outlets. Jim and his wife are the parents of four children and live in San Diego, California.


Keith Wall has served as an editor for Focus on the Family, Multnomah, and David C. Cook. He currently writes full-time in collaboration with several bestselling authors. He and his wife and two children live in Colorado Springs

▼▲
I'm the author/artist and I want to review Encountering Heaven and the Afterlife: True Stories from People Who Have Glimpsed the World Beyond.
Back
×
Back
×