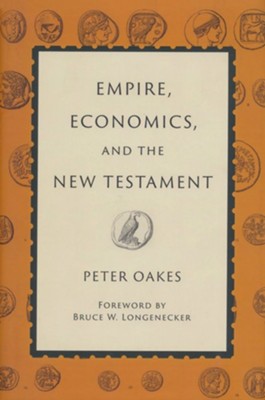 Empire, Economics, and the New Testament

Peter Oakes has long been recognized for his illuminating use of Greco-Roman material culture and social-scientific criticism to interpret the New Testament. Empire, Economics, and the New Testament combines his best work in a single volume and introduces a substantial new essay that challenges current scholarly approaches to paradoxical teachings of the New Testament.

Of special interest to Oakes throughout this book is the concrete impact of economic realities and Roman imperialism on first-century Christian communities meeting in house churches. To address this, Oakes considers an array of textual and archaeological resources from first-century non-elite life, including extensive archaeological evidence available from Pompeii. Readers will find here a deep trove of wisdom for understanding the New Testament in the context of the Greco-Roman world.

▼▲
Peter Oakes is Rylands Professor of Biblical Criticism and Exegesis at the University of Manchester. His other books include Reading Romans in Pompeii: Paul's Letter at Ground Level.

▼▲
"The essays contained in this book (especially those in its first two sections) flow from Peter’s main wheelhouse—listening for the way New Testament texts might have set off various resonances for people variously embedded within the world dominated by Roman structures of value. Whether he is setting out space-distribution modeling, or engaging in socioeconomic modeling, or exploring attitudes toward the Roman Empire, Peter doggedly earths the reading of theological texts in the historical realities of the ancient world. Few are as attuned to matters of Roman social history and cultural conventions as Peter Oakes. In this regard, Peter is one of the best representatives of contemporary New Testament scholarship—as testified to by the essays collected within this volume."
— Bruce W. Longenecker
from the foreword

"Drawing together evidence from archaeological sites such as Pompeii, social science models, and various pictures of ancient economic relations, Peter Oakes imagines how a diversity of people in early churches would have responded to the gospel of Paul and related messages of Christ in the Roman imperial world. Impressive in its range, this collection is highly suggestive for interpretation of texts and the social-economic situation of those addressed."
— Richard Horsley
University of Massachusetts Boston

"Oakes has a unique ability to delve into ancient archaeological evidence and create a vivid and detailed picture of the communities who heard and were shaped by the New Testament writings. Deeply rooted in on-the-ground first-century life, these essays provide stimulating and suggestive resources for interpreting Paul in his economic and imperial context."
— Sylvia C. Keesmaat
Institute for Christian Studies, Toronto

"Peter Oakes is one of the pioneers of the new approach to interpreting the New Testament by a serious consideration of the socioeconomic conditions of the diverse kinds of members of first-century house churches that are reconstructed according to the archaeological data. In his essays on Paul’s and other New Testament writers’ attitudes to the Roman Empire, he is also to be commended for maintaining a cool scholarly head and producing balanced and sensible interpretations."
— Seyoon Kim
Fuller Theological Seminary

"At the time of publication, Peter Oakes’s Empire, Economics, and the New Testament is the most holistic and stereoscopic account available of the sociopolitical realities encountered by the recipients of Paul’s letters. Architecture, cultural identities, economics, patronage, and politics all figure into Oakes’s comprehensive portraits of early Christian communities. This book is essential reading for those who want to understand the life situations of the first audiences of Romans, 1–2 Corinthians, Philippians, and 1 Thessalonians."
— Mark Reasoner
Marian University

"Reading New Testament texts from several perspectives of the sub-elite living in concrete houses in a Roman city like Pompeii and in concrete religious environments like Thessaloniki and Philippi under respective different economic conditions can impressively demonstrate the effects of space and lived experience on first readers understandings of the Gospels and Pauline letters. Peter Oakes’s constant eye on material culture and concrete economic conditions of first-hand readers gives surprising and astonishing new clues to the manifold processes of group formation and their text production in the earliest decades of the Jesus movement. This new book is the fruit of more than twenty-five years of digging into the Jesus tradition and Paul’s letters on a ground level. It is a profound, well-researched, and new approach to the understanding of real first-century readers of New Testament texts in the context of the Roman Empire."
— Angela Standhartinger
Philipps University of Marburg, Germany

▼▲
I'm the author/artist and I want to review Empire, Economics, and the New Testament.
Back
Back