Skip to main content
SPRING CYBER SALE: The sale you've been waiting for! Up to 85% off through 5/25>
Embrace Me - eBook
By: Lisa Samson
Stock No: WW4895EB 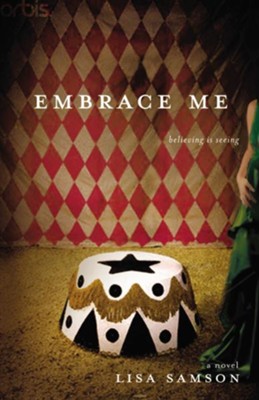 Biting and gentle, hard-edged and hopeful . . . a beautiful fable of love and power, hiding and seeking, woundedness and redemption.

When a "lizard woman," a self-mutilating preacher, a tattoed monk, and a sleazy lobbyist find themselves in the same North Carolina town one winter, their lives are edging precariously close to disaster . . . and improbably close to grace.

▼▲
Lisa Samson's Embrace Me tells the story of a circus freak, Valentine, whose turbulent past reads clearly on her burnt and scarred face. She and the entire gang of misfit sideshow performers spend their summers being gawked at in exchange for moneyand their winters preparing to do it all over again. All the while, Valentine's hardened exterior and irritable nature contrast sharply with her loving attention to Lella, the sideshow's legless, armless woman. But, despite calling Lella her best friend, Valentine refuses to share the true story of her burns with another living soul.

Each chapter break, the narrator switches between Valentine in the year 2008, and Drew in 2003, who has a rough past of his own. We learn Drew's story through the letter of confession he writes to a Catholic priest, thoughironicallyDrew was once a big-shot Evangelical pastor with his own TV show. His gritty, like-me-or-not attitude makes for very compelling reading as he becomes friends with the priest and boldly displays his dirty laundry in transparent detail. As he describes the extent of his pride and manipulation during his days as a pastor, Drew eventually reveals that he has scars which are not written on his face.

Lisa Samson's storytelling feels like a needed slap in the face. While other Christian authors may be afraid of portraying Christianity in a bad light, Samson's characters simply highlight real-life church issues, such as hypocrisy, arrogance, and selfishness, in an attempt to encourage change. Much to Samson's credit, even the Christian characters battle agonizing, believable struggles beyond forgetting to pray. The result is a relatable, honest story of ugliness, masks, and God's ever-working hand through it all.

Though the plotline can become strange at points (and though few, if any, sideshows continue displaying the handicapped in modern times), the author herself acknowledges this stretch of the truth in her Author's Note. Overall, the tale depicts reality with an eerie accuracy, exploring the worst of human actions and motives with a sharp wit and even sharper sense of irony. This novel is neither a conventional romance story nor a light-hearted fairytale. But it is recommended for adults ready to take an objective look at the institutional functions of the church, and for those who are ready to take an objective look at themselves. -- Amanda Branyan, Christian Book Previews.com

▼▲
I'm the author/artist and I want to review Embrace Me - eBook.
Back
Back