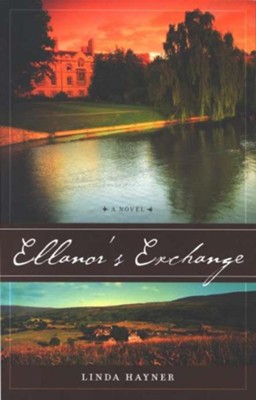 ▼▲
Hopes are high as Ellanor Fitzhugh and her trusted neighbor, a seasoned socialite, set out for London to prepare Ellanor for her debut into society. But as they join the music and the gaiety of English court life, a dark shadow creeps across the red carpet of their plans. Ellanor becomes a pawn, naively thrust into an abyss of treachery and political intrigue. Lady Wilthrop wonders if she'll make it out of London alive. And Ellanor wonders if Lord Wetherby's face will haunt her dreams forever.

▼▲
The book Ellanors Exchange by Linda Haynes follows the coming of age of a fifteen-year-old girl, Ellanor, who is sent to London by her father to mingle with upper class society and, in time, find a wealthy gentleman to marry. True to traditional love story patterns, she eventually does so. By the end of the book, Lord Netherfield finds Ellanor in the garden and tells her that he wants to wed a woman who is loyal, puts the needs of her family and friends before her own, and is very beautiful as well.(193)
Okay, so thats the expected element of this love story. However, between these two events there are a myriad of plot twists and unexpected challenges for Ellanor. As the story opens, Ellanor experiences several personal tragedies (ed. note: skip to the next paragraph if you dont want to read the storyline). First, her beloved brother Paul dies during the influenza epidemic. Second, her father announces that he is sending Ellanor to England to be taught manners, music, and proper courtship by his long time friend Lady Wilthrop. The goal is to have Ellanor ready to make her debut into high society by age 16. Third, once Ellanor arrives in England she is beset by people who act as though they are going to befriend her, but who, in reality, are her enemies. Competition among the young female ladies for the available handsome and rich bachelors is keen, and no outsider such as Ellanor is welcomed into the mix. Many other girls and their parents set out to sabotage the fate of Ellanor, but amidst it all, she has a feeling that Lord Netherfield is pure, chaste, kind, and trustworthy. Her belief in him is justified in the end when he declares his love and devotion to her.
Author Linda Haynes is a good storyteller. Her chapter titles draw the reader into the pending action. The interaction of characters is intriguing, especially since the reader is never sure who is a friend and who is a foe of Ellanor. The books pace is steady, never tedious, and although the end is predictable (hey, it is a love story, after all), the mini-plots and subplots provide for intrigue and suspense.  Jodi Kurht, Christian Book Previews.com

▼▲
I'm the author/artist and I want to review Ellanor's Exchange.
Back