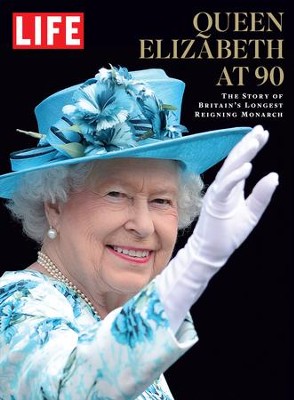 ▼▲
Queen Elizabeth II has been called "A Queen for All Times." At 90 years old, she now has eclipsed Queen Victoria's 63-year record to become Britain's longest reigning monarch. She remains the head of state of the United Kingdom, and a group of 16 nations including Canada, Australia, and New Zealand call her queen, and she is the head of the British Commonwealth which includes another 37 countries, including India and South Africa. Throughout her life, she has enjoyed much happiness including a long and happy marriage to Prince Philip, four children, and Silver, Golden, and Diamond Jubilees. Her reign has also been marked by much sadness, including the failed marriages of three of her children, the deaths of close family members and friends, and the markedly difficult death of Princess Diana, which took a toll on both the Royal Family and the nation.

Now Life, in a new special edition, takes a nuanced and thoughtful look at the reign of Elizabeth at 90 and what her over-63 years on the throne have meant for her subjects and the world at large, including her early life, the years of World War Ii, her marriage and family, life ruling Great Britain, Windsor family values and much more.

With dozens of stunning photos, stories, and analysis, Queen Elizabeth at 90 is a keepsake of both a life well-lived and an historical time on the throne, as well as a captivating collection for any royal watcher.

▼▲
I'm the author/artist and I want to review LIFE Queen Elizabeth at 90: The Story of Britain's Longest Reigning Monarch - eBook.
Back
Back