Skip to main content
BIBLE SALE OF THE SEASON: For a Limited Time ~ Save on over 1,100 Bibles!
Elinor
By: Shannon McNear
Stock No: WW529540 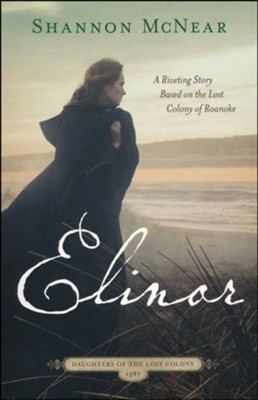 ▼▲
A Journey Full of Hope...
Escape into a riveting story based on the mystery of the Lost Colony of Roanoke.

In 1587, Elinor White Dare sailed from England heavy with her first child but full of hopes. Her father, a renowned artist and experienced traveler, has convinced her and her bricklayer husband Ananias to make the journey to the New World. Land, they are promised, more goodly and beautiful than they can ever imagine. But nothing goes as planned from landing at the wrong location, to facing starvation, to the endless wait for help to arrive. And, beyond her comprehension, Elinor finds herself utterly alone. . . .
The colony at Roanoke disappeared into the shadows of history. But, what if one survived to leave a lasting legacy?

▼▲
Transplanted to North Dakota after more than two decades in Charleston, South Carolina, Shannon McNear loves losing herself in local history. She’s a military wife, mom of eight, mother-in-law of three, grammie of two, and a member of ACFW and RWA. Her first novella, Defending Truth in A Pioneer Christmas Collection, was a 2014 RITA® finalist. When she’s not sewing, researching, or leaking story from her fingertips, she enjoys being outdoors, basking in the beauty of the northern prairies. Connect with her at www.shannonmcnear.com, or on Facebook and Goodreads.

Being long intrigued by the Lost Colony of Roanoke, I was eager to read Elinor, Shannon McNear’s novelization of this true historical mystery. I wasn’t disappointed! The setting, one familiar to me, felt authentically painted. The characters, Elinor and Sees Far in particular, were vivid and sympathetic in their courage to adapt to challenging circumstances and new ideas. To call the research behind this story thorough is an understatement. By the end, I couldn’t turn pages fast enough yet didn’t want the story to end. Readers of Elinor will be glad there’s more to look forward to in this series.

A riveting, romantic, and redemptive story that shines hopeful light on what might have happened to the Lost Colony of Roanoke. Elinor is beautifully told, and Shannon McNear is sure to win historical hearts with this stirring, well-researched tale of early America.

A haunting tale of the New World that doesn't merely tug at the heartstrings.... It wraps around and squeezes until the story becomes part of you--and you part of the story. Elinor is a complex character of strength and weakness, courage and fear, the sort of woman who is truly an everyday hero.

--Michelle Griep, Christy Award-winning author of Once Upon a Dickens Christmas

Tender and terrifying, beautiful and raw. Shannon McNear’s Elinor offers a gripping depiction of what might have been the fate of the Lost Colony of Roanoke in a story as haunting as the mysterious mist-shrouded isles and inlets of its setting. McNear brings to vivid life a world populated by intriguing, realistically portrayed characters who draw the reader ever deeper into this compelling, and at times unsettling story. Despite the tragedy and heartache the colonists endure, the ending brings tears with its vision of a hopeful future for those left behind on that fateful shore. Though it is not the outcome they desired, they choose to trust in the Lord who led them to that land and to believe in the faithful fulfillment of his promises. In Elinor, McNear encourages readers to do the same.

-- J. M. Hochstetler, author of The American Patriot Series and coauthor of the Northkill Amish Series

She’s done it again! Shannon McNear sweeps readers into a world our society barely remembers—much less understands—this time taking up the longstanding mystery of the Lost Colony. Her pen brings to life not only Elinor Dare, her young family, her father—the governor of the colony, and the native people of the New World, but the majestic forests and undiscovered wilds of the land itself. Painstaking research provides a sound explanation for what happened to the citizens of Roanoke, then, in mid-story, you’re snatched away on a nail-biting adventure that doesn’t slow down until its unexpected ending.

Shannon McNear blends a believable tale from documented history, accepted lore, hours of research, and vivid imagination that will pull the reader back in time. Meet the brave men and women who set out to start a colony in the New World even before the Pilgrims. Also meet the Native Americans who befriended and opposed them. Elinor is a compelling and thoughtful story of what might have been.

The haunting story of the Lost Colony of Roanoke is richly reimagined and hard to put down in Shannon McNear’s Elinor. With a deep regard for historical detail, and a voice that brings to life the dangerous and beguiling wilderness of the New World, the author spins a fascinating tale of redemption and possibilities. Elinor’s compelling story is sure to linger long in my memory.

-- Naomi Musch, author of 2019 Selah finalist and Book-of-the-Year nominee Mist O’er the Voyageur, Song for the Hunter, and The Lumberjacks and Ladies collection.

▼▲
I'm the author/artist and I want to review Elinor.
Back
Back