Elijah Among Us: Understanding and Responding to God's Prophets Today - eBook
By: John Loren Sandford 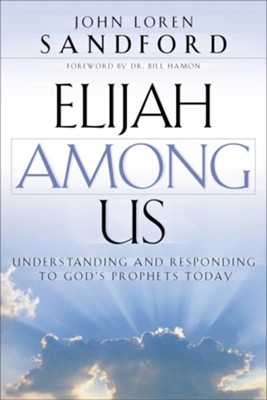 Elijah Among Us: Understanding and Responding to God's Prophets Today - eBook

▼▲
Sandford's The Elijah Task has long been considered one of the best introductions to the office of prophet. Since its publication, many people have asked Sandford to write a sequel, and now he has. In Elijah Among Us Sandford continues his exposition of what he feels is one of the most important (and yet most neglected) offices in the church, that of the prophet.

Thus, he looks at the history of the prophetic office, the functions of the prophetic office, and some of the major tasks and purposes of contemporary prophets. While some may wonder why we need another book on prophecy, Sandford contends that few in the church know, in-depth, what the office of prophet really means and the roles a prophet should play. Too often, according to Sandford, we have limited the prophetic role to that of giving personal words of prophecy. That limitation ignores a significant portion of what the prophetic office should entail, including: blessing, healing, judgment, warnings, discernment, dark speech, dreams, visions, intercession, reconciliation, spiritual warfare, and more.

If we include these other roles, we see that there are very few prophets acting in the fullness of the office. Sandford wrote this book to begin changing that, by helping both prophets and churches understand the depth and fullness of the prophetic office. As Dr. Bill Hamon states in the foreword, this book "can help prophetic ministers function properly in the Church." Once the office is understood, prophets will be able to more effectively function in the roles they are supposed to fill.

▼▲
Twenty-five years after the release of his ground-breaking book The Elijah Task, co-authored with his wife, Paula, a sequel comes from the powerful pen of John Sandford. In Elijah Among Us, he outlines a biblically rooted discussion of prophetic history and functioning, both how to instruct prophets and commission their office and how to inform the church about prophetic ministry. Sandford wrote this follow-up book because he sees a strong and even dangerous overemphasis in the church on the "giving of personal words," which is only one role of the prophetic office.
The first section of this book develops a history of the prophetic office, how the office metamorphosed from one of warning into proclaiming God's gentle and merciful side, and becoming burden-bearers. Second, Sandford sets forth the working functions of prophets, explaining how they serve in twelve major roles, including bringing blessings, healing, warning of impending judgment, giving protection from tragedies, and offering direction, guidance, or confirmation.
Readers will gain crucial knowledge of a widely misunderstood topic, helping them be discerning in these strategic end times. Authoritative and compelling, Elijah Among Us is a timely and vital work for the Body of Christ.

▼▲
John Loren Sandford, ordained as a Congregational pastor, travels worldwide with his wife, Paula, and conducts seminars interdenominationally on marriage and family, inner healing and transformation, prayer, the gifts of the Holy Spirit, burden-bearing, intercession, and more. They make frequent television appearances and are active in the renewal and reconciliation movements. John and Paula live in Hayden Lake, Idaho.

▼▲
I'm the author/artist and I want to review Elijah Among Us: Understanding and Responding to God's Prophets Today - eBook.
Back
×
Back
×