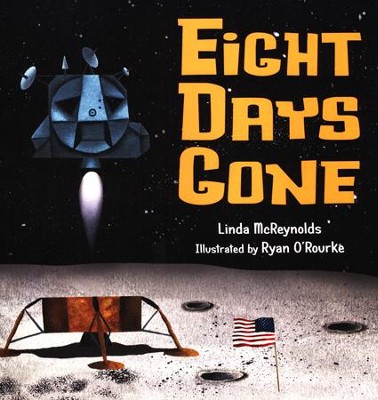 ▼▲
In 1969, the United States put the first man on the moon. With beautiful illustrations of this great eight day trip, and a simple, rhyming text, kids can see first-hand what happened on this historic journey.

▼▲
Snappy verse and retro art brings readers along for Apollo 11's historic, eight-day mission to the moon in 1969. Young readers will learn the basics about the gear, equipment, and spaceship used by the astronauts, as well as the history of NASA's moon mission. O’ Rourke’s vibrant and retro illustrations paired with McReynolds’ short verse creates a perfect read aloud for preschool and kindergarteners eager to learn about Buzz Aldrin’s trip to the moon. Back matter includes a bibliography and author’s note with additional information about the mission and the crew’s return home after the historic first lunar landing.

Samantha R. Vamos is the author of Alphabet Boats, Alphabet Trains, Alphabet Trucks (illustrated by Ryan O’Rourke), The Cazuela That the Farm Maiden Stirred (illustrated by Rafael L&oacute;pez) – 2012 Pura Belpr&eacute; Illustration Honor – its companion book, The Pi&ntilde;ata That The Farm Maiden Hung (illustrated by Sebasti&agrave; Serra), and Before You Were Here, Mi Amor (2009, illustrated by Santiago Cohen). Samantha previously worked as an attorney, practicing in Washington, D.C. and Chicago, IL.  Samantha was born in the Midwest, grew up on the east coast, and lived in the Pacific Northwest before moving to the Bay Area with her husband, son, and their rescue puppy, Bowie. Visit Samantha online at www.samanthavamos.com.


For many years Ryan O'Rourke's illustrations have appeared in galleries, newspapers, and magazines, including a weekly illustration for the Boston Globe Sunday Magazine. One Big Rain marks Ryan's foray into children's picture books. He makes his home in Connecticut.

▼▲
I'm the author/artist and I want to review Eight Days Gone.
Back
Back