Skip to main content
BRING CHRISTMAS HOME SALE: Save up to 85% through 11/2 >
Edmund Burke: The First Conservative
By: Jesse Norman
Stock No: WW062930 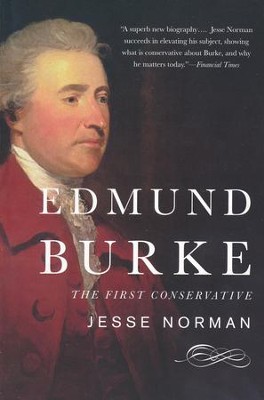 ▼▲
Edmund Burke is both the greatest and the most underrated political thinker of the past three hundred years. A brilliant eighteenth-century Irish philosopher and statesman, Burke was a fierce champion of human freedoms, representative government, and the Anglo-American constitutional tradition, as well as a lifelong campaigner against arbitrary power. A rich, accessible, and provocative biography, Jesse Norman describes Burke's life and achievements alongside his momentous legacy, showing how Burke's analytical mind and deep capacity for empathy made him such a vital thinker--both for his own age, and for ours. Paperback.

▼▲
A provocative biography of Edmund Burke, the underappreciated founder of modern conservatism
Edmund Burke is both the greatest and the most underrated political thinker of the past three hundred years. A brilliant 18th-century Irish philosopher and statesman, Burke was a fierce champion of human rights and the Anglo-American constitutional tradition, and a lifelong campaigner against arbitrary power. Once revered by an array of great Americans including Presidents Theodore Roosevelt and Woodrow Wilson, Burke has been almost forgotten in recent years. But as politician and political philosopher Jesse Norman argues in this penetrating biography, we cannot understand modern politics without him.
As Norman reveals, Burke was often ahead of his time, anticipating the abolition of slavery and arguing for free markets, equality for Catholics in Ireland, responsible government in India, and more. He was not always popular in his own lifetime, but his ideas about power, community, and civic virtue have endured long past his death. Indeed, Burke engaged with many of the same issues politicians face today, including the rise of ideological extremism, the loss of social cohesion, the dangers of the corporate state, and the effects of revolution on societies. He offers us now a compelling critique of liberal individualism, and a vision of society based not on a self-interested agreement among individuals, but rather on an enduring covenant between generations.
Burke won admirers in the American colonies for recognizing their fierce spirit of liberty and for speaking out against British oppression, but his greatest triumph was seeing through the utopian aura of the French Revolution. In repudiating that revolution, Burke laid the basis for much of the robust conservative ideology that remains with us to this day: one that is adaptable and forward-thinking, but also mindful of the debt we owe to past generations and our duty to preserve and uphold the institutions we have inherited. He is the first conservative.
A rich, accessible, and provocative biography, Edmund Burke describes Burke's life and achievements alongside his momentous legacy, showing how Burke's analytical mind and deep capacity for empathy made him such a vital thinker-both for his own age, and for ours.thread on pub day of what people at basic like about it (editors)
"You won't find a more impressive political philosopher than the 18th-century MP who more or less invented Anglosphere conservatism. And you won't find a pithier, more readable treatise on his life and works than this one." --Wall Street Journal

▼▲
Jesse Norman, MP, studied at Oxford University and took his master's and doctorate in philosophy from University College London. He has been an honorary fellow at UCL, a governor of the UK National Institute of Economic and Social Research, and a visiting fellow at All Souls College, Oxford. His previous books include the widely acclaimed Edmund Burke: The First Conservative.

▼▲
"A must-read for anyone interested in politics and history.... Superb."
—Matthew D?Ancona, Sunday Telegraph
"A top-notch introduction to Burke and his paternity of political systems throughout the Western Hemisphere."
—Kirkus Reviews (starred review)
"Norman has a knack for presenting in clear and cogent terms notions taken from political theory, philosophy, and the social sciences."
—Los Angeles Review of Books
"Norman finds just the right balance between fact-paced storytelling and gripping historical detail, and he shines a light both on Burke's great strengths as a thinker, writer, and orator and on his great weaknesses."
—National Review
"Not since Cicero had a major political thinker been a practicing politician in the center of the arena. So it is refreshingly welcome to have Burke reassessed today by another politician.... Norman boldly summarizes Burke's thought for our time."
—New Criterion
"A scintillating book.... Norman's erudition and rebellious streak...has led to chatter about his potential as a Tory leader. He has something of Polonius about him. Just as with an earlier pamphlet called The Big Society, he has now, under the guise of history, articulated much of what our government stands for."—Evening Standard (UK)
"An excellent book, which unites biographical and political insights. The best short biography of Burke for nearly fifty years, and a pleasure to read."
—Harvey Mansfield, William R. Kenan, Jr. Professor of Government, Harvard University, -
"Jesse Norman has brought back Burke in triumph. Anyone who cares about politics will pounce on this book and devour it, as I did, in a sitting. A stunning performance."
—Boris Johnson, former Mayor of London, -
"You won't find a more impressive political philosopher than the eighteenth-century MP who more or less invented Anglosphere conservatism. And you won't find a pithier, more readable treatise on his life and works than this one."
—Wall Street Journal
"An engaging, highly readable, and impressively comprehensive overview. [Edmund Burke] handles the intricacies of English history and politics with great mastery and conveys Burke's character and personality as few of his biographers have managed to do."—National Review
"A superb new biography.... Jesse Norman succeeds in elevating his subject, showing what is conservative about Burke, and why he matters today."
—Financial Times
An outstanding biography."
—Commentary
"A lucid and thrilling exposition of [Burke's] political philosophy.... The second part of the book is pure brilliance, a refreshingly candid and discursive examination of Burke's philosophy, and how the West might be wise to readopt it."
—Washington Times
"A superb new biography.... Norman makes a strong case for Burke's continuing relevance.... Norman succeeds in bringing Burke to life and championing his thought."
—American Spectator
"Norman Burke's biography ought to be one of the hot books for the right over the next year. Like Burke, Norman is a philosopher as well as a politician. He offers a brisk and engaging introduction to the iconic thinker's life and thought."
—E.J. Dionne, Washington Post
"A Conservative NP himself, Norman has been tipped as a future prime minister--but this stimulating book suggests that he may well have an alternative career as a writer instead."
—Sunday Business Post Historical Epics Round-Up (UK)

▼▲
I'm the author/artist and I want to review Edmund Burke: The First Conservative.
Back
Back