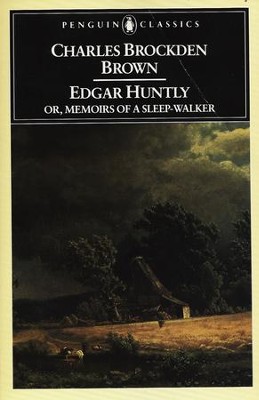 ▼▲
One of the first American Gothic novels, Edgar Huntly (1787) mirrors the social and political temperaments of the postrevolutionary United States.

▼▲
Charles Brockden Brown (1771–1810) was born to a merchant Quaker family in Philadelphia, and was educated at Robert Proud’s school. In his early twenties he committed himself to literature and avidly read the latest models from England and Europe—especially Rousseau, Bage, Godwin, Southey, and Coleridge. By 1795 Brown was earnestly devoted to fiction; once engaged, he composed at a breakneck pace, publishing between 1797 and 1802 seven romances, a long pro-feminist dialogue, and numerous sketches and tales. Four of those romances earned him the perhaps dubious title of "father of the American novel"—Wieland (1798), Ormond (1799), Arthur Mervyn (Part 1, 1799; Part II, 1800), and between those two parts, Edgar Huntly (1799). All four are remarkably sophisticated moral, psychological, and political allegories that burned into the artistic consciousness of Poe, Hawthorne, Fenimore Cooper, and Melville. By the 1820s, a decade after his death, Brown was ranked with Washington Irving and Fenimore Cooper as the embodiment of American literary genius, the first American writer to successfully bridge the gulf between entertainment and art in fiction.

Norman S. Grabo introduced and helped edit the authoritative edition of Arthur Mervyn, and is the author of The Coincidental Art of Charles Brockden Brown and the first book-length study of America’s premier colonial poet, Edward Taylor. He writes widely on early American aesthetics, and is at present Chapman Professor of English Language and Literature at the University of Tulsa.